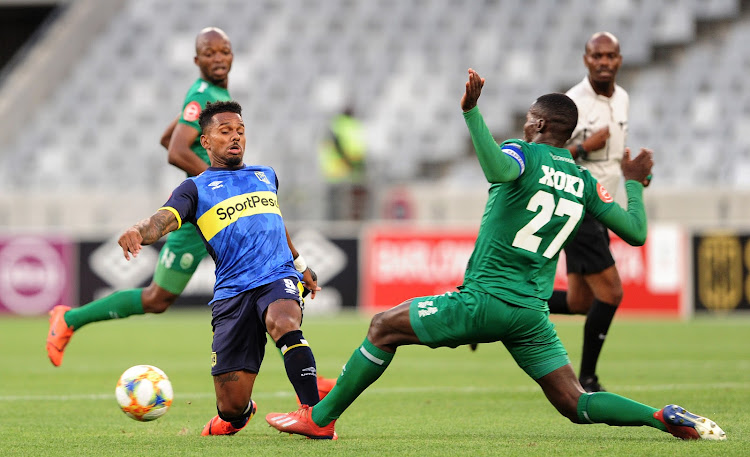 Cape Town City coach Jan Olde Riekerink admits that striker Kermit Erasmus is not yet fully match fit as he prepares his side to travel to face Absa Premiership leaders Kaizer Chiefs on Sunday.

Erasmus looked rusty in the 2-2 draw with AmaZulu at the Cape Town Stadium on Wednesday‚ showing energy in bursts‚ but wayward with his shooting.

He failed to test Usuthu goalkeeper Neil Boshoff despite a number of chances in and around the box and Olde Riekerink will hope he gets that match-sharpness back in training ahead of Sunday’s showdown.

He is a key figure for a side that has struggled for goals of late‚ and the top-scorer in the team with seven goals to date‚ but has also been in and out of the side through injury in. recent months.

“Kermit didn’t train for two months‚ then he came back and so far he is struggling‚” Olde Riekerink admitted.

“But we have to give him the benefit of the doubt because he has to be game fit and at the moment he is not.”

The Dutch coach suggested he would preservere with the Bafana Bafana striker though‚ hinting he will not find space in the side for former Chiefs forward Siphelele Mthembu this weekend.

“Shaka [Mthembu] is a striker in our squad‚ so it is always a possibility.

"But you cannot play with 12. If you play one‚ then you have to take the other one out. Then the question is why do you take this one out?”

Olde Riekerink was left to rue the fact that his team gave up a 2-0 lead in the first half‚ allowing Bongi Ntuli to score twice and bring AmaZulu level.

From there they held on in the second half as City had all the possession‚ but created too few chances with it.

“We made two beautiful goals‚ but then we gave it away. The first 10 minutes and the period after the goals were not good in the first half‚” the coach said.

“The second half was better‚ we created finally three chances. It should be more‚ but at least we created them.

“But the story of the game is that we were 2-0 ahead and it comes back to 2-2‚ and it feels like we lost the game.

“The whole second half they had not one chance. In the first half they were dangerous‚ but the [AmaZulu] goals … they were from a lack of concentration from us.”

The point moves City into 11th‚ two points ahead of Stellenbosch FC in the relegation play-off position‚ and three in front of bottom side Baroka FC.