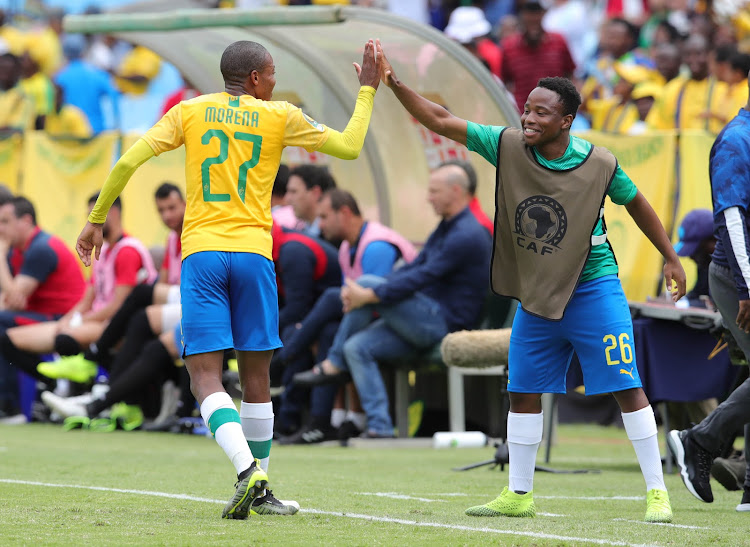 Mamelodi Sundowns have booked a place in the quarter-final stage of the Caf Champions League following a hard fought 2-1 win over USM Alger at Loftus on Saturday.

It will be for the fourth time in five years that the Brazilians have qualified for the knockout stages of his competition.

Sundowns’ goals were scored by while Alger replied through Aimen Mahious in the first half.

What is left for them in their remaining two matches against Wydad Casablanca at home and away to Petro de Luanda later this month is to protect their place at the top of Group C.

The Brazilians remain top of Group C with ten points from four matches and they have also notably increased their unbeaten record in this competition at home to 17 matches.

For Alger, their hopes of getting out of the group is hanging by a thread as his costly defeat has left them with only two points from four matches and they are still looking for their first win.

Sundowns could have won this match by a bigger margin if it was not for their wastefulness in front of goal and they must thank their lucky stars that Mohamed Meftah hit the upright from the penalty spot four minutes from time.

Key defender Ricardo Nascimento also returned to the bench after a long injury lay-off that has seen him miss the start of the current campaign.

The Brazilians now shift their attention to the bread and butter business of the PSL where they have two marquee matches this week.

They have a date with resurgent Orlando Pirates under coach Jozef Zinnbauer at Orlando Stadium on Wednesday but they will be without suspended Zwane.

Three days later, Sundowns have the Tshwane derby against SuperSport United at Lucas Moripe Stadium in Ateridgeville where Mosimane will be up against his former student Kaitano Tembo.

Sundowns was the better side in the early stages as they created better chances and dominated possession but they were let down by their decision making.

Andile Jali, Hlompho Kekana and Sirino were mostly in the forefront of some of their attacks but Thapelo Morena, Vilakazi and Zwane could not find the target.

Vilakazi nearly opened the scoring after 22 minutes but his close range effort was parried away for safety by Alger goalkeeper Mohamed Zemmamouche.

The visitors struggled to assert themselves during the opening exchanges and relied on counter attacks with their tall twin strikers Aimen Mahious and Redouane Chefiri.

On the half hour mark, Sundowns once again breached the Alger defence with a swift attack but Zemmamouche was at his best at the near post to deny Zwane.

After a period of sustained pressure, Sundowns were finally got the opening goal that was thumped home by winger Morena after he pounced on a loose ball in the box.

Alger equalised on the strike of half time through a header from striker Mahious who capitalized on the sloppy defending from Sundowns.

But the Brazlians retook the lead immediately through Vilakazi to make sure that Sundowns go to the break with a slender lead which they held on to for the rest of the second half.