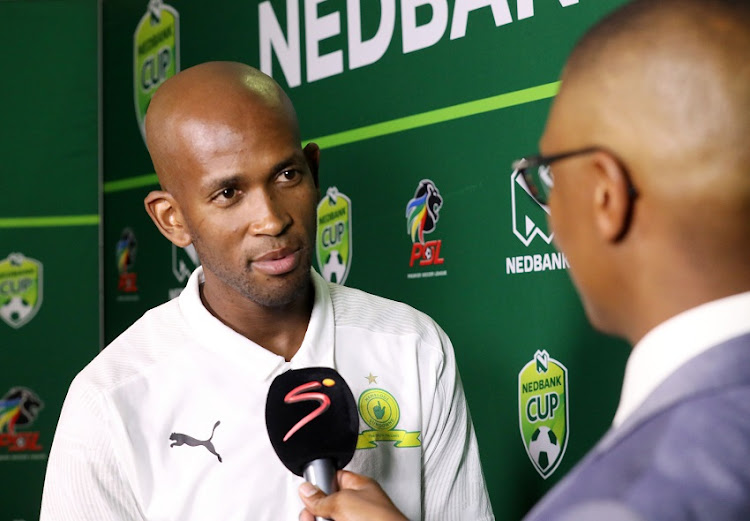 Mosa Lebusa of Mamelodi Sundowns during the 2020 Nedbank Cup Launch at the Nedbank HQ, Johannesburg on the 09 January 2020.
Image: ©Muzi Ntombela/BackpagePix

The Absa Premiership and Caf Champions League are the two most important trophies for Mamelodi Sundowns to chase‚ defender Mosa Lebusa admitted after his team were drawn to meet SuperSport United in the Nedbank Cup last-32 on Thursday night.

Sundowns’ ultra-dependable left-footed centreback did not downplay the importance of the remaining domestic cup trophy‚ as the Brazilians remain in the hunt for four trophies in 2019-20.

It is just that‚ Lebusa stressed‚ at some stage Sundowns might have to be realistic and prioritise.

“Ja‚ four trophies to chase is a lot‚” he said. “For a team like Mamelodi Sundowns‚ with the quality of the guys we have‚ you have to be very ambitious.

“I think we only have ourselves to blame if we don’t get one of those.”

Sundowns know they cannot be too greedy in that ambition‚ Lebusa admitted‚ reflecting the practical outlook often expressed by his coach‚ Pitso Mosimane.

“Look‚ we play each game as it comes. Whichever game comes you have to give it your best‚” he said.

“But‚ ja‚ he [Mosimane] understands as well. That’s where he comes in and he says that sometimes you don’t have to be greedy.

“Because sometimes you can’t win all the games. We have them on our bucket list. I wish it was possible to win them all. Sometimes that’s not possible‚ but we’ll try to go for it.

“Is it possible to win all four‚ with our schedule? To be fair I don’t think it is. But we’ll give it our all.”

Asked which of the four trophies he would choose‚ if he had to‚ Lebusa said: “I would choose the Champions League and the league.

“They’re the most important – the Champions League on the continent and the league in South Africa.

“If we can win the Champions League again we’d be the second team in SA to get the second star.”

Sundowns‚ who have already won the Telkom Knockout this season‚ are in second place in the Premiership‚ six points adrift of leaders Kaizer Chiefs as the Brazilians strive to defend their title.

The 2016 Champions League winners are top of Group C in the 2019-20 competition‚ ahead of meeting Algerian outfit USM Alger at Loftus Versfeld on Saturday (kickoff 3pm).