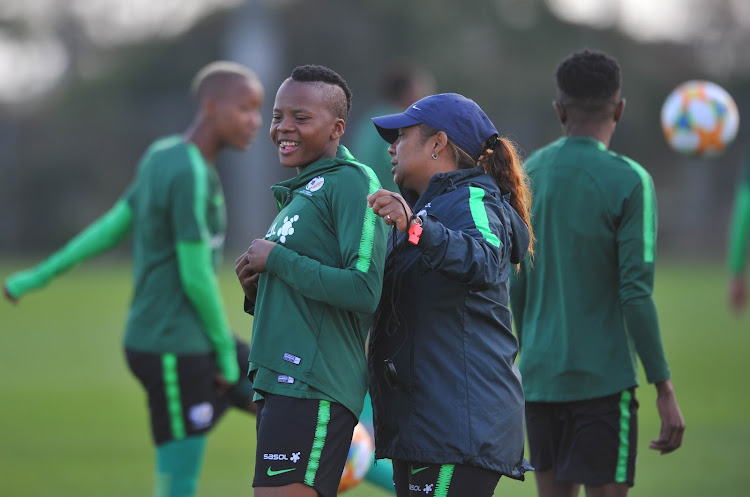 Thembi Kgatlana and Desiree Ellis in good spirits during a training camp in Japan in November 2019.
Image: Sydney Mahlangu/ BackpagePix

Banyana Banyana coach Desiree Ellis has been short-listed for the CAF Women’s Coach of the Year for the second time in succession‚ while Thembi Kgatlana is also in line for the best player award.

Both picked up the respective awards in 2018 as Banyana finished runners-up at the African Women’s Championship and qualified for their first ever FIFA Women’s World Cup.

It is an awards dominated by South Africa‚ Nigeria and Cameroon‚ with the trio also vying for the Women’s Team of the Year prize.

Cameroon might be favourites to pick up that award as they were the only one of the three to qualify for the second round of the World Cup in France‚ where they lost 3-0 to England.

Ellis is up against former Nigeria coach Thomas Dennerby‚ who left the association under a cloud following the World Cup‚ and Cameroon coach Alain Djeumfa.

Banyana forward Kgatlana is up against one of her idols again in Nigerian Asisat Oshoala‚ with Cameroon forward Njoya Ajara the third short-listed player.

Kgatlana had a solid season with Chinese side Beijing BG Phoenix‚ where she scored six goals in nine appearances‚ and also netted a spectacular goal against Spain at the World Cup.

The award winners will be announced on January 7‚ 2020 in Hurghada‚ Egypt.