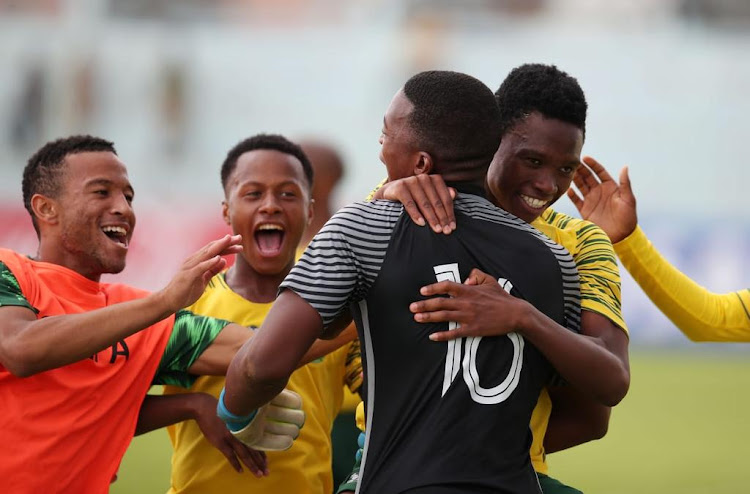 SA Under-20 players celebrate after scoring a goal.
Image: Safa.net

Outstanding SuperSport United youngster Oswin Appollis struck twice as South Africa rallied from two goals down to seal a place in the final of the 2019 Cosafa men’s Under-20 Championship with a penalty shoot-out victory over Madagascar at the Nkoloma Stadium in Lusaka on Thursday.

Appollis saved South Africa with an injury-time equaliser to make the score 2-2 in their semifinal‚ before Helman Mkhalele’s side took the penalty shoot-out 5-4 to seal a gold medal match against either hosts Zambia or Angola‚ who will contest their Last 4 match later on Thursday.

The side were almost made to pay for a sloppy first half in which they conceded twice‚ before Appollis provided hope with a fine solo effort midway through the second period.

South Africa piled on the pressure in search of an equalizer‚ and after several near misses‚ Appollis obliged with his second in the third minute of injury-time to send the game to penalties.

Mkhalele was able to welcome Appollis back from suspension‚ and handed a first start to midfielder Tshepo Myeni in the place of Mohammed Shahabodien.

He came out to collect a long ball over the top of the defence‚ but was beaten in the air by Aristide Ranaivo Harison‚ who headed the ball into an empty net.

It was 2-0 just before the half-hour mark as the Malagasy deservedly increased their advantage‚ Molefe this time beaten by a 25-yard free-kick that arrowed into his bottom corner.

South Africa had the ball in the back of the net when Siyanda Msani tapped in from a headed flick-on‚ but the goal was disallowed for offside in what replays showed to be a tight decision.

Mkhalele’s side eventually hit back in the 66th minute when Appollis beat two defenders in the box‚ before placing a low shot in the bottom corner‚ a goal that showcased all of his qualities.

And with just a minute remaining on the clock in injury-time‚ he was able to make it 2-2 after he evaded a wild lunge in the box and drilled another low shot into the corner of the net to send the game to penalties.

South Africa scored all of their penalties‚ with the Malagasy striking the crossbar with their fifth effort.

South Africa will now seek to make it a hat-trick of titles in this competition in Saturday’s decider.

Mokwena was removed as head coach after the club experienced indifferent results under him.
Opinion
2 years ago
Next Article