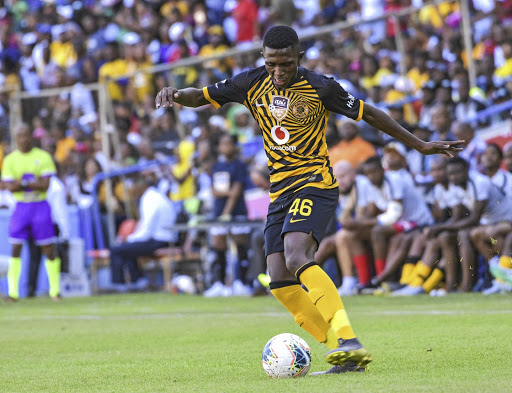 Kaizer Chiefs MDC team's midfield player Keletso Sifamba is also proving to be a revelation with the national under-20 team currently in action in Cosafa Cup in Zambia.
Image: Frikkie Kapp/BackpagePix

Amajita coach Helman Mkhalele has reserved special praise for Keletso Sifama, 16, for his blistering display that inspired SA to a 4-0 win over Lesotho in their last Group B match at the ongoing Cosafa Under-20 Championship in Zambia on Tuesday.

Sifama, a talented attacking midfielder in the books of Kaizer Chiefs, trended when Chiefs' senior team coach Ernst Middendorp gave him a run in their 4-2 win over Mamelodi Sundowns in the Shell Helix Ultra Cup friendly in October.

"Teko" was thrust into the Amajita starting XI against the Junior Likuena to replace Oswin Appolis, who was suspended after picking yellow cards in the matches against Mauritius and Madagascar.

"We don't only scout talent, but we also scout character and Sifama has that character we need. Losing Appolis was a setback but Sifama stepped up to the plate. he did very well and I am very proud of him," said Mkhalele.

The win over Lesotho saw SA top Group B on seven points, guaranteeing their spot in the semifinals. Sifama, Sinenjongo Mkiva, Rahim Milazi and Rowen Human were on target for Mkhalele's troops.

In the semifinal, SA face off with their pool's runners-up Madagascar, who advanced to the last four as the best second-placed nation across all the three groups, at 12.30pm today. Amajita and Madagascar played out to a 1-all draw in the group stages.

"He [Sifama] played his role with aplomb, giving us another different dimension in terms of our attacking strengths. Even when Appolis returns [for the Lesotho game], we now have many options upfront because of what we saw from Sifama," said Mkhalele.

Coach Helman Mkhalele has been impressed with the way his new-look South Africa side has gelled as they look forward to a 2019 COSAFA Men’s Under-20 ...
Sport
2 years ago
Next Article