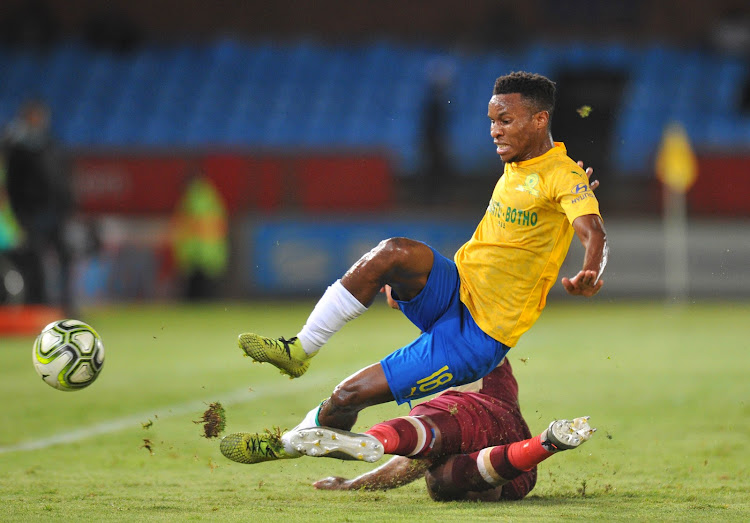 Themba Zwane was back to his usual best and was the conductor of the the Mamelodi Sundowns attack.
Image: Sydney Mahlangu/ BackpagePix

Mamelodi Sundowns showed character to come back from a goal down to beat stubborn Stellenbosch FC 3-1 during their Absa Premiership encounter at Loftus on Wednesday night.

The match was dominated by referee Kulasande Qongqo who awarded Sundowns what looked like a soft penalty in the second half that was put away by Themba Zwane to equlise after 56 minutes.

The spotlight fell on Qongqo again 20 minutes from time when he justifiably sent Stellenbosch captain Mogamad de Goete for an early shower for a reckless challenge on Rivaldo Coetzee.

With this hard fought win, the Brazilians remain third with 24 points and a game in hand but they trail runaway leaders Kaizer Chiefs by ten points.

On the other hand, Stellenbosch remain rooted at the foot of the table with 12 points from 14 matches and they are faced with a mountain to climb to revive their campaign.

Mosimane went into this game with one eye on the Telkom Knockout final against Maritzburg United at the weekend in Durban.

Mosa Lebusa, Anele Ngcongca, Lebogang Maboe and Mauricio Affonso started off the bench while Gaston Sirino served the last match of his suspension and he is available for final at the weekend.

Zwane, who was playing his second competitive match since he returned from a long injury lay-off, stayed on the pitch for 90 minutes to improve his match fitness.

For visiting coach Stellenbosch coach Steve Barker, he was forced to play this game without captain Jarrod Moroole, Kris Bergman and Robyn Johannes and dearly missed the trio.

He entrusted the responsibility of taking the game to Sundowns to the likes of Nkanyiso Zungu, Moon, Nyiko Mobbie, who is on loan from Sundowns, Mogamad de Goede and Mpho Matsi but they did not ask the right questions.

After a spell where there were not too many clear cut chances, the opening goal finally arrived after 35 minutes when Ryan Moon out jumped Lyle Lakay to beat Mweene from a cross by Marc van Heerden.

Sundowns equalised in the 56th minute through Zwane’s controversial penalty.

Stellenbosch were reduced to ten men after 71 minutes when De Goete was shown a red card by Qongqo for an over the top tackle on Rivaldo Coetzee who was replaced by Lebusa.

As a result of the De Goete’s crunching tackle, Sundowns bench moved out of their technical area in protestations and Qongqo ordered substitute goalkeeper Reyaard Pieterse to the dressing room.

In the closing stages, Sphelele Mkhulise and Keletso Makgalwa ensured the three points when they found the back of the net for the much needed three home points.

Bidvest Wits dominated the game but still lost in Mali on Sunday‚ leaving coach Gavin Hunt's stuck with just a solitary point in the group phase of ...
Sport
2 years ago
Next Article