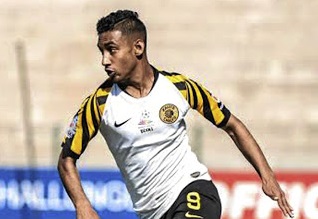 Up-and-coming Kaizer Chiefs striker Yaseen Bunting is confident he can surpass his older brother, Yusuf, who was also on the books of the Glamour Boys before he was released in October.

Yaseen, 20, is an integral part of Chiefs' MultiChoice Diski Challenge (MDC) side, having scored five goals in as many reserve league matches this season.

"To be honest, I believe I can go further than my brother. I foresee a brighter future for myself.

"My brother [Yusuf] has been troubled by injuries and that has delayed his progress," said Yaseen.

Yaseen has also set his sight on promotion to the senior team, drawing motivation from his peers such as Nkosingiphile Ngcobo, Happy Mashiane and Siphosakhe Ntiya-Ntiya, among others. The trio ascended from the MDC to the senior side.

"My dream is to play for the first team next season. I am working very hard to achieve that.

"I am looking up to the guys like Ngcobo, Happy and Ntiya-Ntiya, they are a motivation for me because they started in the MDC as well," said the younger Bunting.

The Potchefstroom-born, North West, striker also highlighted what makes him and his sibling different type of strikers.

"We [him and his older brother] are very different in terms of how we play.

"I am a bit more of a hold-up play kind of a striker, while my brother's style of play is more about pace. quick movements," noted Yaseen.

Amakhosi are seventh on the MDC log with 26 points, 18 behind leaders Mamelodi Sundowns after 17 games. However, Yaseen strongly think they can still topple the Brazilians.

"There's still a long way to go . this is a marathon, anything can happen. We can still win the league. Yes, the gap [between them and Downs] is huge, but we can close it," Yaseen asserted.

Meanwhile, Chiefs released Yusuf, 23, in October, having been struggling to nail down a spot in the first team's playing squad owing to injuries.

The older Bunting had a disappointing loan stint with Highlands Park, playing only two minutes of the two league matches he was involved in last season.

As they've been in bullish form, topping the standings, Kaizer Chiefs defender Daniel Cardoso seems to have a notion their early dominance has ...
Sport
2 years ago

Kaizer Chiefs’ winning team against traditional rivals Orlando Pirates on Saturday did not have any outstanding individuals and the triumph was more ...
Sport
2 years ago
Next Article