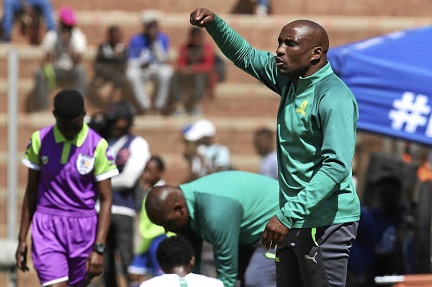 The Kaizer Chiefs and Mamelodi Sundowns MultiChoice Diski Challenge (MDC) sides will have to soldier on without their head coaches who are on international duty this weekend, with Sundra Govinder and Surprise Moriri the stand-in mentors.

Chiefs face SuperSport tomorrow at Lucas Moripe Stadium without their mentor Arthur Zwane, who is with Bafana Bafana as Molefi Ntseki's second-in-command for Sunday's Nelson Mandela Challenge friendly against Mali at the Nelson Mandela Bay Stadium.

Meanwhile, Notoane's juggling act means former club striker and his deputy Moriri will steer the ship when the Brazilians reserves take on a rejuvenated Orlando Pirates side on Sunday, also at Lucas Moripe Stadium.

Notoane doubles up as SA Under-23s coach and he's with the side in Egypt for a friendly with the North Africans on Sunday. The match is aimed at preparing for the upcoming U-23 Africa Cup of Nations.

At his new Chloorkop surroundings‚ Mamelodi Sundowns defensive midfielder Sammy “Vieira” Seabi feels like a kid in the candy store.
Sport
2 years ago

It's the first time Govinder, who is Amakhosi's head of youth development, takes charge of the MDC side.

However, the club's spokesperson, Vina Maphosa, sounded optimistic that he'll produce the goods.

"He [Govinder] is a top coach. I do not think he'll struggle. With his knowledge of this team, I am positive that we will win against SuperSport," Maphosa told Sowetan yesterday.

Moriri is no stranger to the head-coaching role in the Diski league having filled in for Notoane in a number of matches before, when he was busy with the Afcon qualifiers.

Celtic should have full quota of players for Stellenbosch FC match

Bloemfontein Celtic have been clearing out their treatment room and should have an almost full quota of players to pick from when they host rookies ...
Sport
2 years ago

Players to watch in Diski Challenge

With the MultiChoice Diski Challenge (MDC) kicking off tomorrow, Sihle Ndebele picks five players who could be the next reserve league stars.
Sport
3 years ago

Ex-Mamelodi Sundowns player and assistant coach Alex "Barnes" Bapela has explained why returning to the Tshwane side is of no interest to him.
Sport
3 years ago
Next Article