'Let's not get carried away': Ernst Middendorp 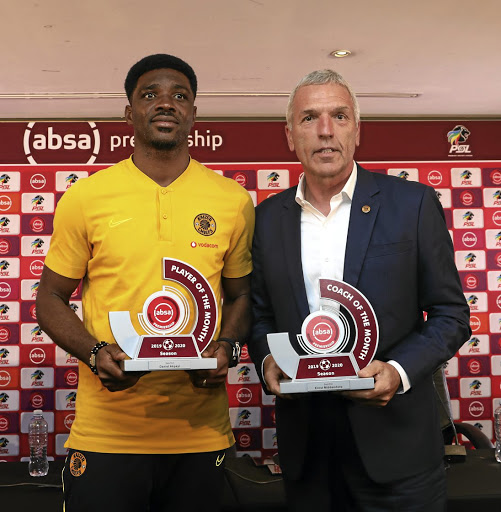 Daniel Akpeyi of Chiefs and his coach Ernst Middendorp with their awards./Muzi Ntombela / BackpagePix

Kaizer Chiefs coach Ernst Middendorp has urged everyone associated with Amakhosi to be self-effacing, amid the club's upturn in the league.

Speaking after scooping the Coach of the Month accolade for September and October at the PSL headquarters in Parktown yesterday, where his charge Daniel Akpeyi also walked away with the Player of the Month gong, Middendorp preached humility and reprimanded those who are overexcited about the club's recent good fortune.

"We start getting carried away and not having our feet on the ground then we lose fundamental [sight] of what is a basic for really keeping a balance, for keeping going and being hungry," said Middendorp, who had also won the same award in August.

"If we start now being carried away and talking in a way that we disrespect opponents and other teams in the league then we make a difficulty ourselves, that's not necessary."

Kaizer Chiefs coach Ernst Middendorp appeared to take a subtle dig at his management after his team bounced back from a semifinal disappointment on ...
Sport
1 year ago

Middendorp's comments about humility were triggered by a spate questions on Itumeleng Khune's fitness after the club released a statement last Friday that he'd recovered and was fully fit to face Maritzburg United in the Telkom Knockout semifinals on Sunday.

This was in defiance of the German's assertion a day earlier that Khune was not fit, with the club's statement seeming to undermine his authority.

Middendorp went on to reiterate that Khune was still not fit and that he didn't see the keeper being ready for the next game against Bloemfontein Celtic on December 7.

The Amakhosi coach dedicated his award to his technical team and playing personnel, believing it would not have been possible to clinch it without them.

"I'm grateful for this award. It is a reflection of the work we have been doing. It is not about me but the technical team, the players at Kaizer Chiefs," said Middendorp.

Top of the table Amakhosi recorded their biggest win thus far when they outshone newbies Stellenbosch 4-0 on Wednesday, with Samir Nurkovic netting a brace, while Siyabonga Ngezana and Dumisani Zuma were also on the scoresheet.

Kaizer Chiefs picked up a double scoop‚ as Ernst Middendorp won the Absa Premiership’s Coach of the Month‚ and goalkeeper Daniel Akpeyi Player of the ...
Sport
1 year ago

It is hard to imagine what he would have been like had his side lost‚ such was the irritated and morose mood that Ernst Middendorp displayed after a ...
Sport
1 year ago

Kaizer Chiefs coach Ernst Middendorp has once again voiced his displeasure over the handling of his international players after star Khama Billiat ...
Sport
1 year ago
Next Article