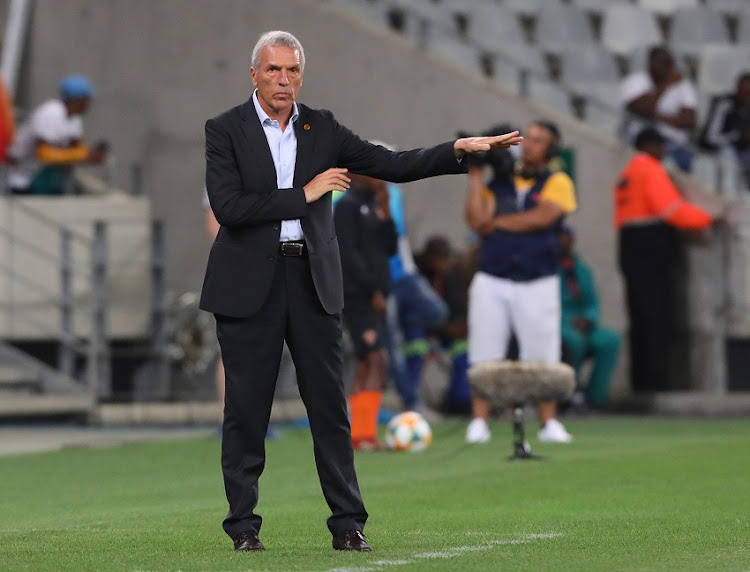 It is hard to imagine what he would have been like had his side lost‚ such was the irritated and morose mood that Ernst Middendorp displayed after a one-sided victory for his Kaizer Chiefs charges on Wednesday night.

The coach seemingly found no joy from an away 4-0 thumping of Stellenbosch FC that not only took his side past the 30-point mark with just 12 games of the season played‚ but also opened up a 10-point gap at the top of the Absa premiership standings.

Instead it was an opportunity to take a pot shot at whatever had been irritating him over the last week‚ including his own club’s management‚ and make a few bewildering observations both in the post-match television interview plus the later post-match press conference.

Asked how satisfying Wednesday’s victory was‚ particularly in the light of the surprise semifinal setback in the Telkom Knockout at the hands of Maritzburg United last weekend‚ the answer set the tone for a laconic and‚ at times‚ rambling discourse.

“Basically I’m not interested about yesterday‚ two days and three days ago. This is probably because of my age because time is a limited resource for me‚” he said

There was no hint of any pleasure on the part of the 61-year-old‚ even if his side delivered a polished performance and dealt competently with their lower standard opposition.

“Let’s be humble and healthy in our preparations and our reflection‚ knowing from where we are coming from.

“We are coming from ninth position last season where we didn’t achieve anything and we really prepared well in the pre-season‚ and (do so) day-in and day-out.

“Of course‚ it is disappointing not to win each and every game but we try.”

Middendorp did say he was pleased with how his players handled the ‘one-on-one’ situations and with their transitional play.

“Tonight was definitely a game where a high number of key players performed to the standard we expect from them‚ without mentioning any names.

“We definitely go with a lot of joy onto our flight back to Johannesburg‚” he said‚ without offering any evidence of that joy.

Next he was asked about whether the level of expectation now was beginning to ramp up the pressure on his club.

Middendorp habitually sits down at post-match press conferences with an air of ‘what stupid question am I going to be asked now?’ and does little to hide his contempt.

While no coach is expected to be full of platitudes and bonhomie‚ and Middendorp does not seem to need acceptance or affection‚ a little civility can never be out of place.

His answer continued into a complaint about criticism he had received for fielding Njabulo Blom in the semifinal against Maritzburg United and also observations about the depth of the squad.

He did lighten up a little when asked about the backing of the Cape Town-based fans.

“It is always a pleasure to get support and cheering as we have seen‚" he said.

"It’s a pleasure for us that despite this being an away game‚ we still experience this very productive support which helps the team.”