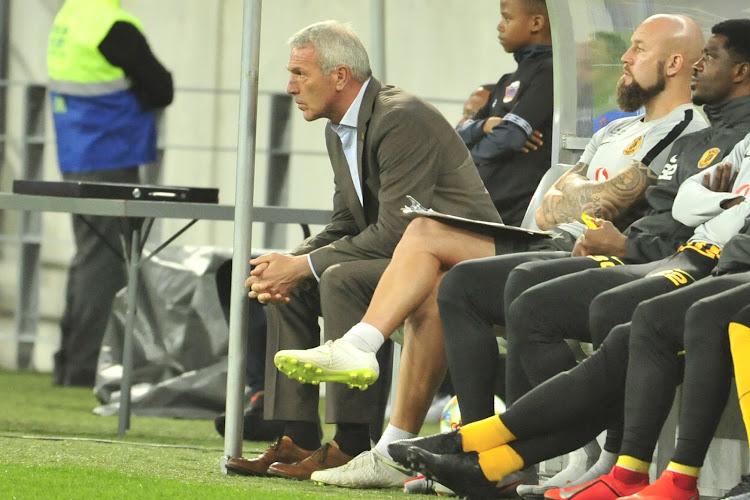 Ernst Middendorp watches on during a match.
Image: BackpagePix

Kaizer Chiefs coach Ernst Middendorp was at a loss as to explain the lackluster display from his players in their surprise 2-1 Telkom Knockout semifinal loss to Maritzburg United in Mbombela on Sunday.

Middendorp's charges were outplayed in all departments and were only spared humiliation on the scoreboard by Maritzburg’s inability to take their numerous simple chances as the Chiefs defence was at sixes and sevens.

They were missing the spine of their team through suspension – goalkeeper Daniel Akpeyi‚ centre-back Erick Mathoho and defensive midfielder Willard Katsande – but Middendorp did not want to use that as an excuse.

“It’s bit a of a disappointing situation and not expected.

"We definitely have not taken our role as being the favourites‚ having maybe a bit more individual quality‚” Middendorp said.

“We were too easy in certain moments and giving them the opportunity to come in front 1-0. We had our problems and they deserved to win‚ they had opportunities to score more.

“In defence we were definitely not present‚ our combination through the midfield was non-existent. It is a bit surprising … it is always an option to skip the midfield now and then but it was too much.

“We haven’t played as we have done before.

"We equalised and you would expect that we could then go with 1-1 into extra-time and then try to handle it. But it did not work.”

Middendorp said for whatever reason‚ too many of his players had an off-day.

“We have just not seen the players perform the way they can. There were too many players on our side not really into it.”

Middendorp also rued the absence of lead forward Khama Billiat‚ who was left out with a hamstring issue that the coach said was worsened on national team duty with Zimbabwe.

“It is upsetting‚ he went with a tight hamstring into two national team games.

"He played Botswana already with pain and then again against Zambia. It was impossible‚ we tried [to get him fit].”

Chiefs are next in action on Wednesday when they travel to Cape Town to meet Stellenbosch FC in the Absa Premiership.

“We are not splitting games into cup games‚ we just go from game-to-game and we have not performed. We have underestimated [Maritzburg]‚ that is all.

“We have our next game on Wednesday‚ we must refocus now and do everything to be ready.”