Chiefs clash will be a step up for Stellies 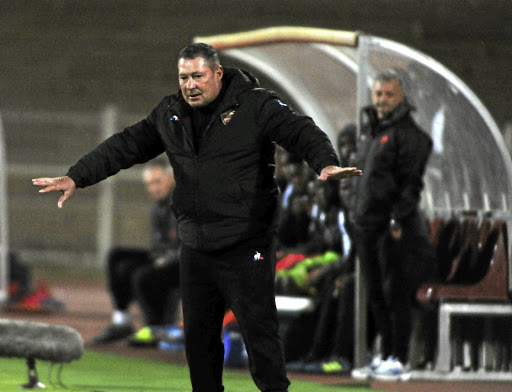 With a sellout crowd at Cape Town Stadium expected tonight, Stellenbosch coach Steve Barker has described the match against Kaizer Chiefs as the biggest in the careers of most of his players.

With it being their first season in the top flight, many of the Stellenbosch players have never experienced playing in a arena packed with thousands of fans. The well-supported Amakhosi are expected to attract a large crowd to the Mother City stadium (7.30pm kickoff).

"It's always nice to play a club like Chiefs. Any player would love to play in front of a stadium where there are at least 25000 people. They are playing well and are on top of the league," Barker said.

"Most of my players have never played in front of a big crowd so it will be a chance for them to show their talents."

Chiefs are on a six-match winning streak in the Absa Premiership and will look to extend their lead at the top of the standings.

Barker has praised his counterpart Ernst Middendorp for getting the team to play their best football in a long time.

"They are on top of the log and have won nine out of 11 games, we have to give credit. They are playing to their strengths," he said. "They have got [Samir] Nurkovic and Leo Castro who are aerially dominant as you have seen. It's different from the old Kaizer Chiefs way of playing but they need to win again and if it's working for them then you can't fault that."

Having beaten Orlando Pirates in the league earlier this month, Stellies will be confident they can overcome Chiefs.

"We have some good weapons in our team that we hope to unleash on Chiefs. We will be concentrating on what we are good at and excetute it well I believe we will cause them problems," Barker said.

Stellenbosch FC coach Steve Barker is expecting a very different Kaizer Chiefs when the AmaKhosi travel to Cape Town for an Absa Premiership clash on ...
Sport
2 years ago

Stellies will be without veteran defender Morgan Gould, who is suspended. Chiefs should be boosted by the return from suspension of Daniel Akpeyi and Willard Katsande. Khama Billiat has also travelled after missing the weekend's Telkom Knockout defeat to Maritzburg.