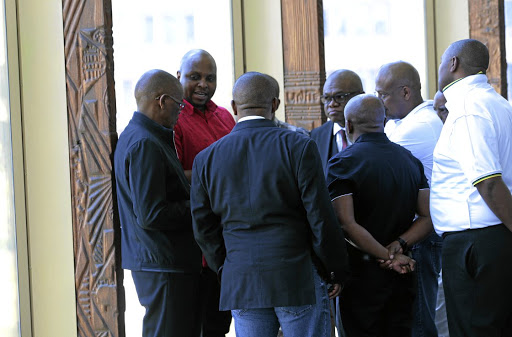 The EFF has given both the DA and ANC a headache by insisting that in order for one of them to get the mayorship of Johannesburg, they would have to let go of Tshwane.

The Red Berets issued the ultimatum amid horse trading between political parties in a day of high drama in both Tshwane and Johannesburg councils. Council vote in Johannesburg had to be postponed on technicality, while in Tshwane council meeting went on until late last night.

In Johannesburg, council was convened to elect a new mayor following the resignation of Herman Mashaba.

Tshwane mayor Stevens Mokgalapa faced a motion of no confidence over a leaked sex tape but the vote was delayed until late last night. Behind the drama of delays were the talks between the EFF, DA and ANC in both councils.

EFF deputy president Floyd Shivambu said the party held a view that no one political party can govern both the metros.

"Whoever is going to support us here [Tshwane], we will support them in Johannesburg. Be rest assured that by the end of next week, the EFF will be having a mayor in one of these two metropolitan cities," Shivambu said.

The council meeting in Tshwane has just taken a break to allow parties to caucus on the issue of mayor Stevens Mokgalapa's special leave.
News
1 year ago

It seems like all the parties, including DA and ANC, agree that no one party can run both municipalities without the involvement of the EFF.

The DA has previously rejected EFF's demand for the mayorship of Tshwane but yesterday the party appeared to reconsider their stance.

"It is a matter of engagements that we are going to be involved in over the next few days so that we've got a final product. It is actual better that the council of Johannesburg could not finalise the election of its mayor today. It gives us space to deliberate on all these issues," said Shivambu.

Behind the doors talks yesterday, the ANC tried to woe the EFF to vote with them in Johannesburg but the negotiations deadlocked over ANC's unwillingness to change its mayoral candidate Geoff Makhubo.

The heated meetings had to move outside the council chambers where Shivambu informed ANC secretary-general Ace Magashule that if they wanted the EFF's vote they would have to replace Makhubo with another candidate as he was problematic and had been linked to the Gupta family.

The DA has conceded that it will lose the City of Johannesburg if it fails to strike a deal with the EFF by today.
News
1 year ago

However, this was rejected by Magashule, who informed Shivambu that they were not willing to take instructions from the EFF. An ANC senior leader told Sowetan that the EFF had not made their demands for a trade on the metros official and that as far as they were concerned, their negotiations had deadlocked.

DA runs a risk of losing both Tshwane and Joburg should it not accede to the EFF's demands after the Red Berets yesterday was hellbent on removing Mokgalapa through a motion of no confidence.

A DA leader in Johannesburg said that the EFF and the democrats would find each other by next week's vote.

Another DA leader said it was unlikely for the party to give EFF either Tshwane or Johannesburg as the democrats held a long standing view that they would govern where they have the most numbers in a coalition.

The question that needs to be asked to the EFF is, when the DA says No because we won't give them a municipality will they vote with the ANC?

The speaker of the council in Tshwane Rachel Mathebe has rejected the motion of no confidence against undersiege mayor Stevens Mokgalapa. Mathebe ...
News
1 year ago

The ANC in Gauteng has confirmed that it will field its own candidate for the council vote for the new Johannesburg mayor to replace outgoing ...
News
1 year ago

The ANC says it will go to court over the postponement of a Johannesburg council meeting on Thursday that was meant to elect a new mayor.
News
1 year ago
Next Article