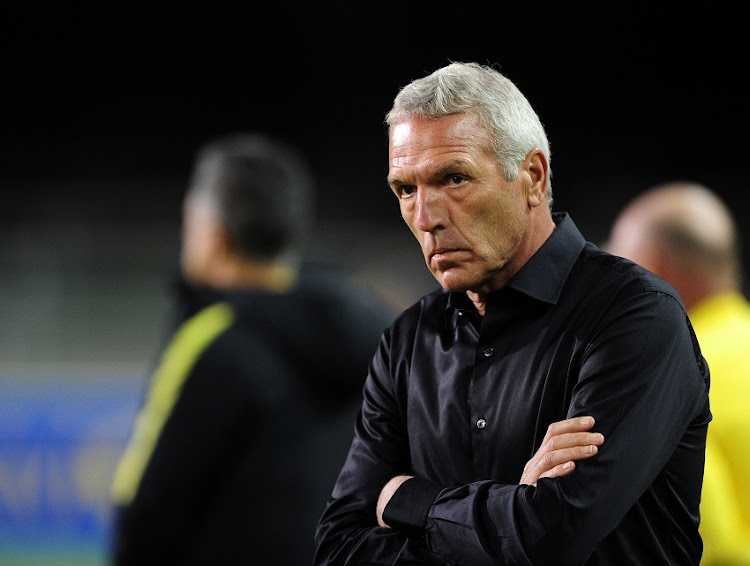 Kaizer Chiefs coach Ernst Middendorp appeared to take a subtle dig at his management after his team bounced back from a semifinal disappointment on the weekend with a resounding 4-0 Absa Premiership thrashing of Stellenbosch FC.

AmaKhosi put behind them a 2-1 upset at the hands of Maritzburg United in the Telkom Knockout semis on Sunday with an emphatic league victory at Cape Town Stadium that saw them go back to 10 points clear in the PSL.

Middendorp‚ afterwards‚ appeared to indicate he might have had some degree of scolding from AmaKhosi following a flat cup defeat in Nelspruit.

The coach‚ characteristically grumpy when one might have thought he would be pleased at the result‚ said the Stellenbosch comeback showed people in his club that “sometimes a game is not like you want to have it”.

“We had good management of one-on-one situations. That was definitely – ja‚ let’s be honest – terrible in our last game‚” Middendorp said in his post-match TV interview on SuperSport.

“Sometimes it’s about the basics. That was one element in the forward movement‚ one against one‚ out of the midfield area‚ penetrating the space.

Did he answer the question?

“It’s sometimes irritating if you see it [not happening] in a game‚ because we have talked about this stuff since the beginning of the preseason.

“But we are dealing with human beings‚ and everybody inside the club must understand that sometimes a game is not like you want to have it.

“But I think of today‚ I am very pleased with the performance.”

Ngezana did have a storming match defensively‚ and scored the opening goal too‚ returning from having played for the SA Under-23s who won bronze at the U-23 Africa Cup of Nations in Cairo on Friday by beating Ghana on penalties.

“Ja‚ I don’t know if Samir deserved to be man-of-the-match‚ but I didn’t really know how Siyabonga Ngezana would come into the game being only two days with us‚” the coach said.

“But that was a [one of the best] performance I have seen from him in my now 12 months [at Chiefs] – excellent.”