Vukušič confident of steering struggling AmaZulu away from the relegation quicksand 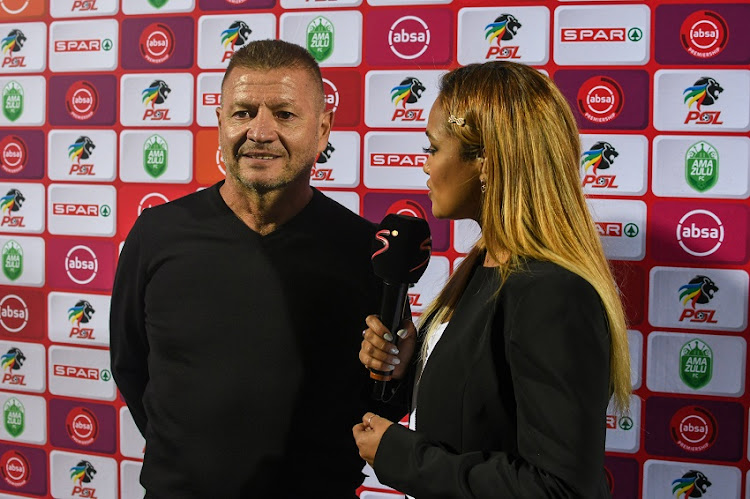 Struggling AmaZulu might be flirting with danger at the moment but coach Jozef Vukušič remains optimistic that they will negotiate their way out of the relegation quicksand.

But Usuthu have a mountain to climb as their 1-0 league defeat to Mamelodi Sundowns in Pretoria on Tuesday condemned the Durban side to 15th spot on the standings with just eleven points from twelve matches.

Vukušič remains unfazed‚ even though AmaZulu have played a game more than basement dwellers Chippa United.

“I am not worried about the situation that we find ourselves in on the log‚” said Vukušič.

“What makes me positive is the performance of the players in the second half against a strong team like Sundowns because we showed that we can play football.

"We must move forward now because we have tough games coming against tough opponents.

“We have one home game against Maritzburg United‚ who will be playing in the Telkom Knockout cup final next month‚ and two away games against Black Leopards at Thohoyandou Stadium and Bloemfontein Celtic at Petrus Molemela Stadium.

"I am not worried because soccer is not about that‚ you have to work‚ improve and learn from games like the one against Sundowns.

“There is a lot of material that we can use for the next games.

"We have been in worse situation than this and managed to get out.

"We must use these next three games to move out of the relegation zone.”

Looking back at the defeat to Sundowns‚ Vukušič said they held their own against the defending champions.

“They got opportunities from counter-attacking situations but our game was more better.

"I think in the last 15 minutes we could have scored because we matched them when it comes to the tempo of the game and that shows that there is potential.

“I am happy about the performances of some of the youngersters.

"It is not good that we lost the game but we had to substitute the goalkeeper and a defender and that took away our attacking options.

"We had a chance in the dying seconds of the match but we did not score the goal.”