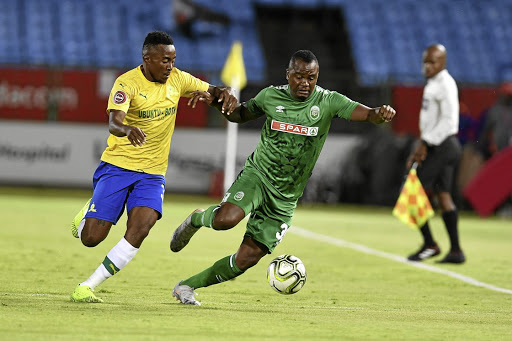 Mamelodi Sundowns star midfielder Themba Zwane will be wrapped in cotton wool for the next week or so before being unleashed on Wydad Casablanca and Maritzburg United.

Zwane has been sidelined with a hamstring injury for the past month that has seen him miss his club's recent matches and withdraw from the Bafana Bafana squad.

The 30-year-old is slowly being reintegrated into the team and has started training again.

Coach Pitso Mosimane wants to have "Mshishi" ready for next week's CAF Champions League clash against Wydad and the Telkom Knockout final with Maritzburg United on December 14.

After that, they travel to Morocco to take on Wydad next Saturday before looking forward to the TKO final against the Team of Choice.

"Do we need Mshishi to play against the Angolans? Yes, he is the one who plays the music but do I want to risk him? Remember on the 27th [December] we will be playing football, so I think we are going to need him for the long haul," Mosimane said.

"I hope he will be back, after the Angolans we are going to Casablanca and after that it's the TKO final."

Downs overcame a feisty AmaZulu with a 1-0 win, thanks to an Ali Meza strike in Pretoria on Tuesday.

Mosimane is starting to depend on auxiliary players with some key members of his squad missing. "The boys showed that they deserve a chance because we are playing the Champions League, Telkom Knockout and the league in seven days. You need everybody to be part of this because there are injuries and suspensions so it's not easy."

Before that TKO final, Sundowns have a scheduled league match against Stellenbosch FC which they have requested the PSL to reschedule.

"I think the league will move that game [against Stellenbosch]."

The league yesterday confirmed the match had been postponed to a later date.