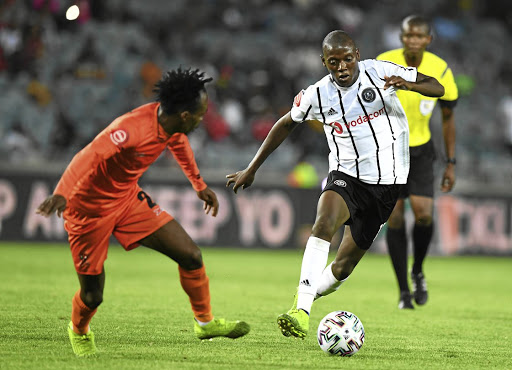 Kabelo Dlamini of Orlando Pirates in action with Mpho Mvelase of Polokwane City during their league match on Tuesday.
Image: Gallo Images

Since replacing Milutin Sredojevic in August on an interim basis at Orlando Pirates, coach Rulani Mokwena has used 27 of the 31 registered players.

Having been changing and chopping his XI, Mokwena looks to have finally found his trusted playing squad as he kept the same 18-man match day troops for their past two league outings against Kaizer Chiefs and Polokwane City respectively.

In fact, except for Chabalala, who has played one game thus far, the aforementioned players haven't featured at all this term, with Sam and Tlolane yet to make their debuts since joining from Bloemfontein Celtic and Chippa United respectively.

"It's important to be consistent with the starting line-up, we are getting our momentum and we should look at keeping it going," said Mokwena in the wake of their 3-2 league success over Polokwane on Tuesday at Orlando Stadium.

Bucs struck through Gabadinho Mhango (from the penalty spot), Tshegofatso Mabasa and Kabelo Dlamini. Rise and Shine had broken the deadlock via Charlton Mashumba earlier on, but Bucs came back strongly before Mpho Mvelase grabbed the Limpopo club's second goal in the stoppage time.

Pirates' star and reining Footballer of the Season Thembinkosi Lorch and Polokwane striker Puleng Tlolane were simultaneously red-carded, by referee Masixole Mambiso, after a confrontation.

While rebuking Lorch's behaviour, Mokwena indirectly dismissed the wild-held notion that the Bafana Bafana ace is struggling to replicate his last season's exploits.

"Nyoso [Lorch] should not have retaliated. With a little bit more emotional intelligence, he could have avoided the situation," said Mokwena.

"Who has the Footballer of the Season award at home? It's Lorch. So, he's got nothing to prove to anybody."

Without suspended Lorch, the Sea Robbers hope to collect six points from their last two fixtures before the end of the year against fellow Limpopo sides in Baroka and Black Leopards on December 7 and 21 respectively. "You termed it operation Limpopo, we've termed it operation festive season. We want to make our fans happy."

27 players Mokwena has used since taking over: