Mkhalele 'promised' U20 job should he win Cosafa 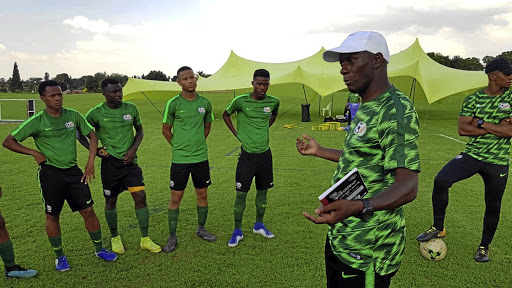 Amajita interim coach Helman Mkhalele talks to his players as they prepare for the Cosafa Cup that kicks off next week. He's been told to win the competition if he wants the job on a full-time basis.
Image: SAFA

The SA Football Association (Safa) has promised to give Amajita interim coach Helman Mkhalele the job on a full-time basis, should he win the Cosafa Under-20 Championship, hosted by Zambia from December 4-14.

This is according to a source close to Safa's dealings. Having served as an assistant to Thabo Senong, Mkhalele, a retired Bafana Bafana winger, assumed the head coach role in June when the local football governing body opted against renewing Senong's contract.

"Safa has given Mkhalele a mandate to win the Cosafa Cup, and then the job is his permanently. He [Mkhalele] is very determined to deliver, because he loves working with young players," said the source yesterday.

"Remember that the U20 team have been using the Cosafa Cup to prepare for Afcon, which serves as a ticket to the World Cup so, Safa wants the same again. they aim for continuity with Mkhalele because he assisted Senong when they qualified for the last World Cup [in Poland earlier this year]." Attempts to reach Mkhalele and Safa's officials drew a blank.

Amajita are in Group B alongside Lesotho, Madagascar and Mauritius at this year's U20 regional tournament.

Group A is made up of hosts Zambia, Malawi, Comoros Island and Botswana.

Pool C has Angola, Mozambique, Eswatini and the Seychelles.