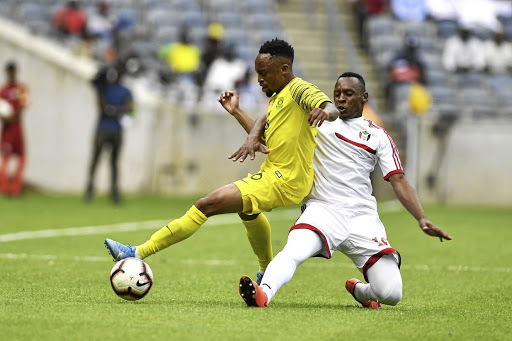 IIn the end, they needed Lebogang Phiri to spare the team's blushes, but Bafana Bafana will know that their performance against Sudan in the 1-0 win at home was hardly good enough.

Phiri saved the team from a possible ring of boos as his 45th-minute strike boosted Bafana's 2021 Africa Cup of Nations qualification campaign.

Coach Molefi Ntseki rang in the changes knowing that nothing less than a victory would be good enough. Five changes were made to the team that lost 2-0 to Ghana in the Gold Coast last week.

Powerful forward Lebo Mothiba led the attack with Percy Tau. Their partnership worked well under the system of previous coach Stuart Baxter and it remains to be seen if it will have the same effect under Ntseki.

Mis-communication in the 40th minute showed how out of sync they were in this game. Instead of easily laying off the ball for Tau, Mothiba unwittingly nicked it away from him and the chance was wasted.

Tau was limited to the left side of the field, which appeared to make him less effective. The Club Brugge star plays his best football when given a free role in attack.

Bafana created a handful of chances in the first-half but lacked the clinical edge needed for such games.

Bafana coach Ntseki set to ring the changes against Sudan

Molefi Ntseki has hinted at making changes to his team when Bafana Bafana host Sudan in a crucial 2021 Africa Cup of Nations qualifier at Orlando ...
Sport
2 years ago

SA should have dominated the 128th-ranked Sudanese but did not do enough to dominate even a team from the Faroe Islands.

The team will be judged on results and it is those results that will determine the longevity of the coach.

With home side struggling to impose themselves, Sudan began to grow in confidence and Yasir Mozamil nearly landed a sucker punch in the 62nd minute that could have changed the complexion of the game.

Sudan went into the match high on confidence after thrashing Sao Tome 4-0 in their opening game.

Bafana held on until the final whistle for the precious three points in Group C.

The keeper was on holiday in goal as Sudan never threatened throughout the game.

Was Bafana's live wire, with his ability to track back immediately after losing possession while attacking.

Hlanti had an average game, he delivered a number of enterprising crosses, but was too relaxed at times.

He put in a solid shift, winning almost all the aerial battles against towering Sudan attackers.

Like his partner at the heart of defence Mathoho, Hlatshwayo hardly put his foot wrong. The skipper, however, committed some dangerous fouls.

Mokotjo misplaced several passes. He wasn't his usual self but he redeemed himself.

Furman put in an average shift and he sometimes failed to out-muscle the Sudan midfield men.

Despite scoring the decisive goal, Phiri tried to make Bafana play. He combined nicely with the likes of Percy Tau.

Failed to live up to expectations. The Club Brugge ace recorded a handful of shots on target.

Serero tried to use his skill to unlock the Sudanese rearguard, but indecisiveness proved his major downfall on the day.

Mothiba missed a number of good goal-scoring opportunities, especially in the first half. The lanky striker gave little. - Sihle Ndebele