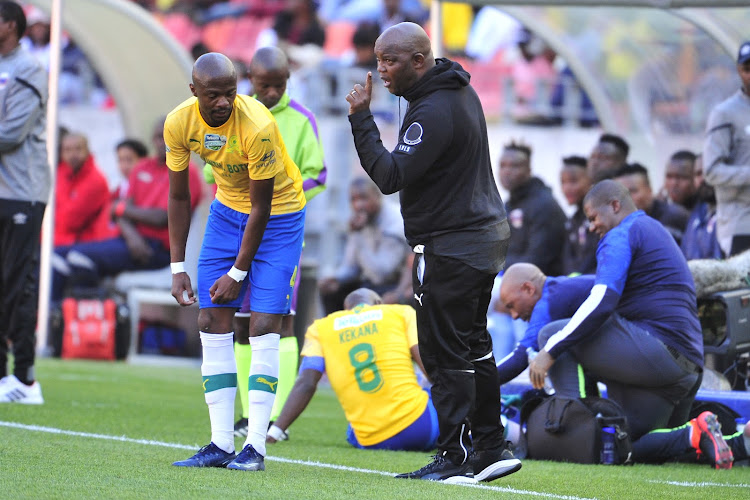 Pitso Mosimane says injuries to his attacking players will take their toll ahead of the Absa Premiership clash with Baroka FC in Polokwane on Wednesday‚ but adds his side are ready to “grind” out a result any way they can.

Mosimane says the side might have to abandon ‘Piano and Shoeshine’ for the Baroka clash and be more direct in the way they play with Gaston Sirino‚ Themba Zwane and Phakamani Mahlambi all likely to miss the clash.

Sirino and Mahlambi limped out of Sunday’s Telkom Knockout quarterfinal victory over Chippa United‚ while Zwane has been missing for the last two weeks through injury.

“You lose Sirino to an injury and you bring Phakamani on‚ and then have to take him out again‚ also with an injury. And also we don’t have Themba Zwane‚ the guy who starts the music …” a rueful Mosimane said.

“The game in Baroka will be a tough one. We will have to make changes.

"We must hustle and make sure we win the match. It is not important how you win it‚ trying to play the Sundowns way.

“When you have Sirino‚ Phakamani and Themba out‚ you have to just hustle and grind it out.

"We are not a team that is always playing nice and beautiful football‚ we can grind it out.”

Mosimane says he prefers to play with two strikers up front‚ which should mean another start for tall Uruguayan forward Mauricio Affonso and Venezuelan Jose Ali Meza.

The Sundowns coach has been pleased with the way Affonso has settled in at Chloorkop.

“We know what kind of player he is‚ we got Mauricio for the PSL and for Africa. But more for Champions League to be honest.

"He adds a different dimension to our game‚ he plays on the ground‚ not only on aerial strength.

“You saw the goal against Highlands Park‚ he can play (with his feet). It is a plus to us.

“If you have Mauricio up front you must put the ball in the box‚ he is a big boy.”

Sundowns twice came from behind to draw 2-2 with Chippa and force the game to penalties‚ where they triumphed 3-2 to set up a Telkom Knockout semi-final with Lamontville Golden Arrows in Durban.

“It was a difficult game‚ we didn’t start in our normal way‚ where we always control the game.

"But that was maybe normal. We come from a loss (against Kaizer Chiefs) last week and the guys were a little bit emotionally dented.

“The opponents scored in the first 10 minutes of the game and I never thought we would come back‚ because we were on the back foot.

"But we showed character because we came from behind all the time and controlled the possession.

“They were dangerous because they played on the break. But we never panicked and came back to win the game on penalties.”