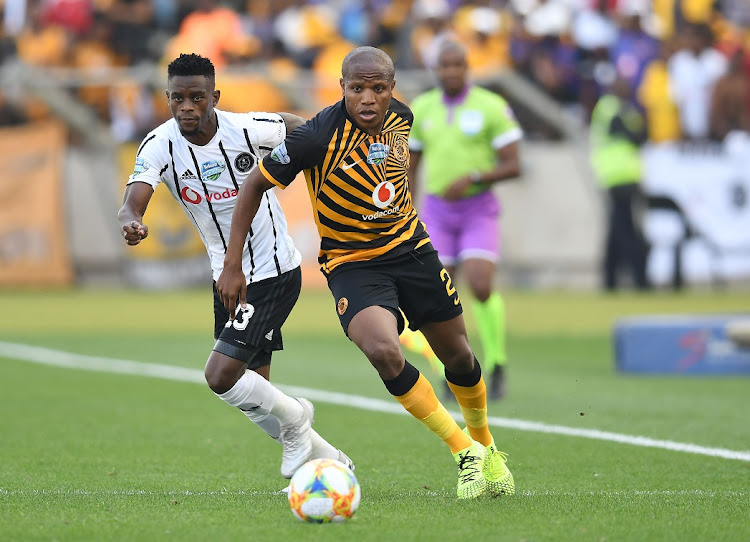 A team who looked ordinary and in a meltdown last season appear to be in business this campaign.

Kaizer Chiefs suffered the ultimate embarrassment of missing out on the top eight last season but they have bounced back with top spot on the Absa Premiership standings and a place in the semifinals of the Telkom Knockout.

Their place in the next round was achieved as a result a 4-2 penalty shootout win over 10-man bitter rivals Orlando Pirates in drama-filled Soweto derby in front of a sold-out Moses Mabhida Stadium, which was unfortunately also was dominated by referee Jelly Chavani and his assistants.

Pirates were reduced to 10 players when they had right-back Mthokozisi Dube sent off in the 50th minute for a second bookable offence, after dangerous play on Khama Billat.

After 120 minutes of engrossing attacking football, the two teams could not be separated as they were tied 2-2 and Chavani had no choice but to call for the lottery of the penalties just after 5.30 pm.

Happy Jele and Gabadinho Mhango scored for Pirates while Ben Motswari and Abel Mabaso could not convert their spot-kicks.

Match officials stole the limelight with a number of controversial decisions that went with the theme of “benefiting” that was coined by outspoken Mamelodi Sundowns coach Pitso Mosimane.

At the moment anything looks possible for Kaizer Chiefs and in Durban on Saturday they pulled off a therapeutic first win over Pirates in 12 matches, in open play, over their bitter rivals.

Some may disagree with the manner in which they are going about their business in terms of the type of football they are playing, but coach Ernst Middendorp has often been about substance rather than style.

Before the penalties, officials owned the show and the first moment of controversy arrived after 21 minutes.

Chiefs striker Samir Nurkovic thought he had equalised with a close-range header from Khama Billiat’s cross only to be erroneously judged off-side by side assistant Zakhele Siwela.

On the hour mark, Pirates were lucky to continue the game with 11 men as referee Chavani had a reason to send midfielder Thembinkosi Lorch for an early shower after a deliberate stamp on Khama Billiat.

As a result of the incident, tensions boiled over with both sets of players at each other’s throats and Lorch escape with only a yellow card, which did not go down well with Chiefs’ supporters.

On the stroke of half time, the spotlight once again fell on Chavani as he controversially let Chiefs off the hook by waving play-on when it appeared that goalkeeper Daniel Akpeyi brought down Tshegofatso Mabasa inside the box.

Chavani took centre stage again after 50 minutes when he flashed a red card to Mthokozisi Dube for a second offence forcing Pirates to defend their lead with numerical disadvantage for the rest of the match.

The first goal was scored by Fortune Makaringe after 34 minutes, and it took 61 minutes of the game for Chiefs to equalise through Leonardo Castro.

Cardoso gave Chiefs the lead shortly in extra time but Mhango eqalised, forcing the match into penalties where Chiefs prevailed.