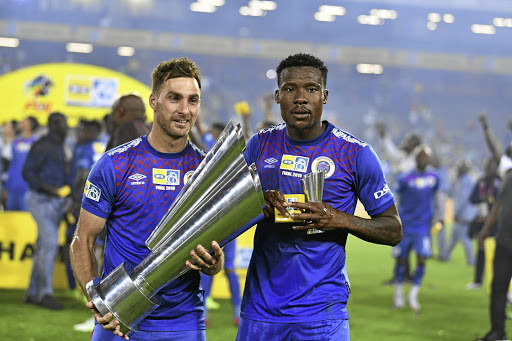 Gabuza, who refused to engage with the media after putting in a man of the match display to help SuperSport win the MTN8 by outshining Highlands Park on Saturday at Orlando Stadium, lost his son last Monday and gave the funeral, on Thursday, a miss, to boost his chances of playing in the final.

Anticipating that the club wouldn't allow him to feature in the Wafa Wafa final, Gabuza hid his tragedy until the final whistle on Saturday.

Many have questioned the striker's sense of family responsibility and fatherly love.

"Everyone was shocked, it just shows his character," said Grobler, whose lone strike sealed the deal for Matsatsantsa against the Lions of the North.

"Overall, I am just happy for him, he's been through a tough time. He's come to us, we've welcomed him as a family. It's disappointing [that he missed his son's funeral], but it shows how much character he's got."

Grobler confirmed that Gabuza wasn't comfortable to detail what really happened to his son.

He pledged the team's support for his fellow striker.

"He didn't go into details. He got up and told us all... the situation dampened the mood a bit in the dressing room. SuperSport is a family, everyone got behind him," noted Grobler, who's now scored seven goals across all tournaments thus far this season.

Grobler further dedicated the Wafa Wafa triumph to their mentor, Kaitano Tembo. It's Tembo's maiden trophy as a head coach.

"It's a great feeling [to win the MTN8]. Coming into this game after losing last year's final on penalties, a lot of players were still hurting, so it was important to put that behind us by winning this year. This one is for the coach, he's been working very hard," said Grobler.

"We hope that this cup sets a good tone for the season. Coach Kaitano deserves a cup, he's been brilliant for us."