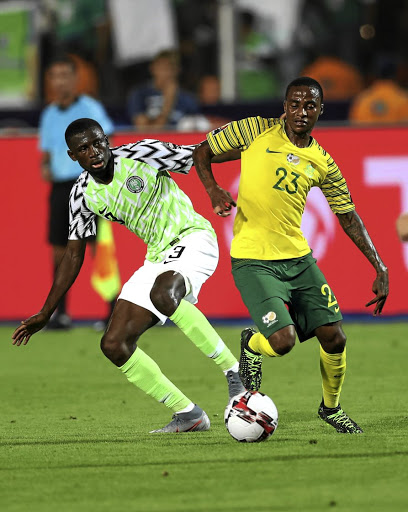 Thembinkosi Lorch, right, seen here challenged by Jamilu Collins of Nigeria during the Africa Cup of Nations in July, is looking forward to Sunday's friendly with Mali.
Image: Samuel Shivambu/BackpagePix

The SA senior team will take on Mali in the Nelson Mandela Challenge in Port Elizabeth on Sunday (3pm).

It will be Ntseki's first match since his appointment last month. "It was very disappointing that as a country we had to go through that period of xenophobic violence which affected everyone," Lorch said.

Two countries, Zambia and Madagascar, pulled out of Bafana friendlies after the attacks. "I am looking forward to working with the coach again. In the previous international week we were looking forward to playing and representing the country."

"He is a good coach and works well with his players. He doesn't have favourites and treats everyone equally.

It was meant to be Ntseki's debut game but was forced to be delayed. Now that debut game will be on a big occasion in honour of the world icon Madiba.

The former national under-17 coach admitted he is eagerly awaiting the match.

"I am excited to work with the players again and put into practice some of the ideas I have with the team," Ntseki said.

"There are some more things I would like to do with the players. So we will be picking up from where we left off the last time."

Incredibly, this will be the only preparation game Ntseki will have for the 2021 Africa Cup of Nations qualifiers against Ghana and Sudan in November.