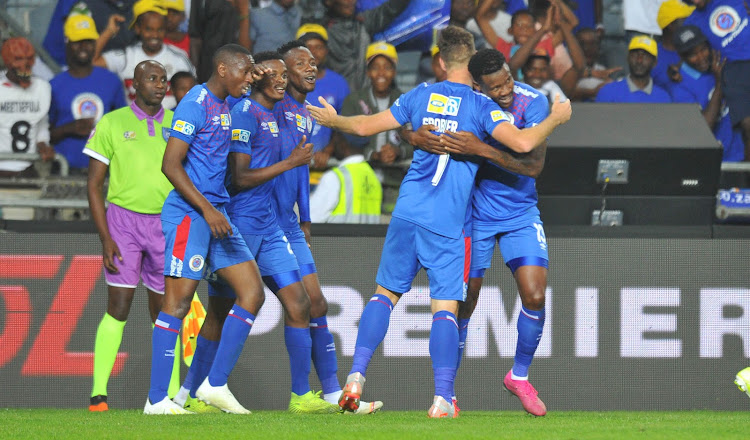 Goalscoerer Bradley Grobler celebrates with teammates after scoring the only goal of the match.
Image: Sydney Mahlangu/ BackpagePix

Cup pedigree helped SuperSport United bag their third top eight silverware when they beat debutants Highlands Park with a lone first half header by striker Bradley Grobler in a lively but poorly attended MTN8 final at the Orlando Stadium in Soweto on Saturday night.

SuperSport were very much content to absorb the early pressure and only catch their speedy opponents with transition before Grobler pounced with his typical glancing header at the right time to confirm his team as cup kings of recent times in SA football.

Grobler’s winner came on the stroke of the first 45 minutes and against Owen da Gama’s side which dominated the early exchanges and had a couple of openings of their own to take the lead.

But just as referee Victor Gomez was about to send both teams to the break, SuperSport midfielder Teboho Mokoena broke free from his marker on the right and went on to deliver a pin point cross for Grobler to easily  nod home the winner and his second of this competition.

Grobler’s goal was also rewarded handsomely by the sponsors of this cup who had put an offer of R25,000 for every goal scored in this final.

This gesture was part of the 25th anniversary celebrations by one of SA’s giant mobile companies.

The trophy is a significant achievement for SuperSport coach Kaitano Tembo, who in his first season as head coach at the Pretoria club, lost the very same cup to Benni McCarthy’s Cape Town City on penalties in Durban in September last year.

For SuperSport, this success serves to further illustrate their domination of the local football scene as it is the sixth cup in eleven cup finals they’ve contested in the past few years in the PSL.

Highlands could have taken the lead as early as the 3rd minute when Mothobi Mvala found himself unmarked but shot straight to Ronwen Williams in SuperSport’s goal.

But Da Gama’s team should be given some credit for coming out smoking in the second half, continuing to put their foes on the back foot.

Mvala should have again found the equaliser for Highlands in the 60th minute but was unlucky to see his header bouncing off the post when Williams was in no man’s land.

With 15 trophies Kaizer Chiefs are still kings in this competition, with Orlando Pirates trailing them in some distance with nine titles.

While SuperSport scored six goals to reach this final, Highlands only scored once in their 1-0 victory against Orlando Pirates in this venue, with Wayde Jooste who came off on the bench for the injured Lesenya Ramoraka, scoring the winner.

While everything was in order in this final, the attendance left a bitter taste in the mouth.

The organisers had claimed earlier in the week that they had sold 20,000 tickets for this final.

But the poor turn up showed again just how much the Johannesburg-based soccer community have lost the appetite to attend important games in their own backyard.

The last time this venue hosted this final was in 2012 in a clash between SuperSport and Swallows.

At best the people who managed to put their bums on the seats could be between 10,000 and 15,000 with the upper tier completely empty in a stadium with a 40,000 capacity.