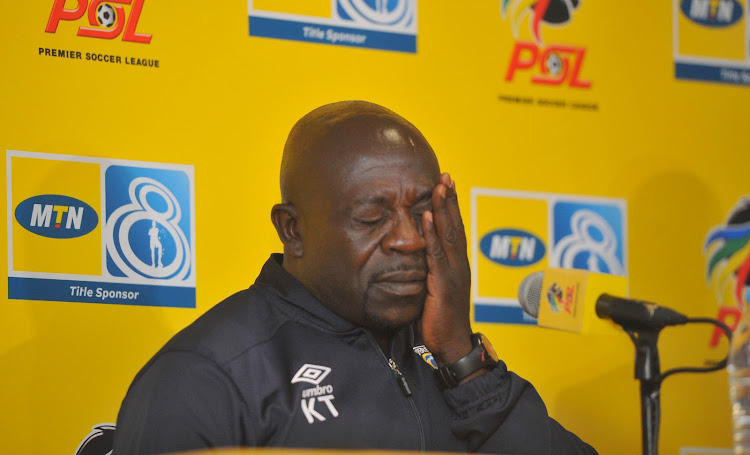 SuperSport United coach Kaitano Tembo is determined to win the MTN8 trophy on Saturday and put the spotlight on underrated coaches and players in the country.

United face Highlands Park at Orlando Stadium in Soweto in the final and says a win would serve as motivation to development coaches and players.

Tembo earned his stripes at the youth structures at the club where he coached the U17‚ U19‚ and reserve sides for almost a decade before he was promoted to first team assistant coach.

“Winning this cup would mean a lot to me‚ especially to development coaches and players‚” he said.

“I have gone through development structures from U17‚ U19‚ reserve team and to assistant coach.

"I think it would give motivation to those coaches who are working at that level because it is not easy to get opportunities at a higher level.

“It would also serve as motivation for development players‚ that’s why I am always trying to give youngsters hope by playing them in the first team.

"It would also mean a lot to me if I could be able to show coaches at development level that if you work hard there are opportunities.

"That goes to junior players as well because if you work hard you get opportunities to play for the first team.”

Saturday's final will be the second in succession for Tembo in the same tournament and he will be desperate to avoid a repeat of last year after losing to Cape Town City on penalties.

“It was painful to lose on penalties to Cape Town City but to be honest‚ during the 90 minutes and extra-time they were the better team in terms of overall play‚" he said.

"We could have snatched it during penalties but it could have been sad for them because they were the better team and deserved to win the cup‚” he said.

If United overcome Highlands and lift the cup‚ Tembo would achieve the feat of having won the tournament as player and coach after winning in 2004.

“I am not really thinking about the fact that I have a chance of winning the tournament as player and coach‚" he said.

"I will be able to think about that after the game‚ for now I am trying to focus on the team because it is not about me.

"There are a lot of people who work behind the scenes at the club and we work as a family where different people contribute differently.”

Tembo is aware that their mission of lifting the trophy is not going to be an easy one as Highlands are structured under experienced coach Owen Da Gama.

“Highlands Park are a solid team and they work very well together‚" he said.

"We will need to work a little bit more in terms of our movements to be able to penetrate them.

"I believe that we have the quality to break any defense but we will work on our strategy to break them and hopefully it works on Saturday.”