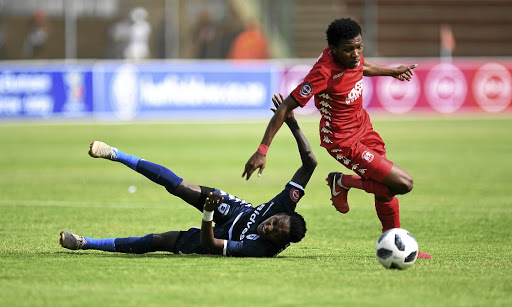 The old saying that if you want loyalty then get a dog took a positive turn when devout supporters of Highlands Park turned Makhulong Stadium in Tembisa into something similar to an EFF rally; what with the red colour that dominated the stands on Saturday.

Brad Katfel and Sinky Mnisi, who are two of the three owners of Highlands, paid tribute to their fans.

"They brought us back into the game even when we were a goal down early," said Kaftel, mopping his brow not because of the scorching heat but because of Wits' resurgence towards the end.

"They were unbelievable. I am delighted to be part of this team."

Wits took the lead through Gift Motupa on the 13th minute but Peter Shalulile equalised for the Lions of the North six minutes later.

Mokete Mogaila netted the winner in the 70th minute, helping his side to leap from the 10th to the ninth spot in the standings.

"Our fans could have easily abandoned us and paid attention to the derby between Orlando Pirates and Kaizer Chiefs if they were not loyal to the club. I am more than excited that the boys paid that loyalty back with a clean victory. Wits will go and tell other teams about coming to the 'house of pain and suffering'."

Highlands' top scorer Mothobi Mvala was curiously missing from the match-day squad. His absence had been preceded by reports of a rift with club management, who took exception to a recent interview he did with SuperSport, where he expressed a desire to join a bigger team.

Wits travel to Black Leopards in the Nedbank Cup second round on Wednesday.