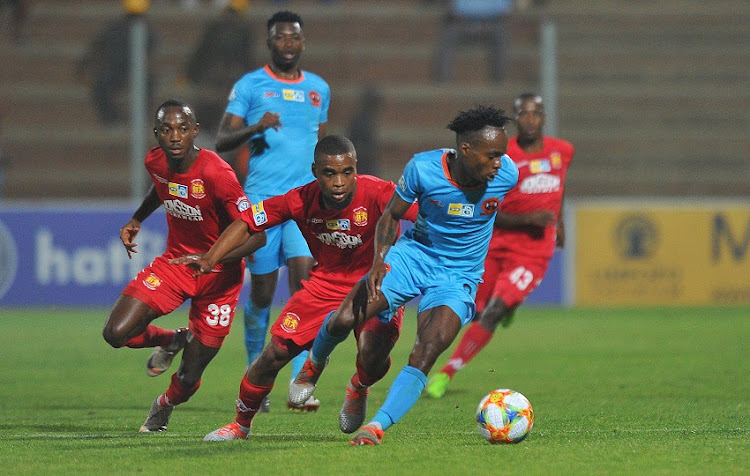 After 180 minutes without a goal scored, substitute Mokete Mogaila slotted the decisive kick in the lottery of the penalty shootout and Highlands Park were into their first ever cup final in the PSL era with a 4-3 spotkicks MTN8 semifinal win against Polokwane City.

The first leg ended 0-0 as something of a sleep-fest. The second leg at Makhulong Stadium on Tuesday night saw the same score after 90 minutes, though was more testy, while still watchable and fairly engrossing, than poor.

Two teams seeking the history and prestige of a first cup final were both unwilling to go on a charge of the Light Brigade.

The match went straight to penalties, where three Polokawne players choked, and one less from Highlands.

It was an eventful first half, which simmered without catching fire. At times challenges made a thumping sound that ricocheted across the concrete stands of Makhulong Stadium.

For the first 22 minutes nothing happened. Then a tight encounter opened a little.

Polokwane right  wing Walter Musona brought the ball down and struck a volley from a tight angle that forced Thela Ngobeni to dive for a stop.

Almost from the counterattack, at the other end Peter Shalulile found space on the right and struck the crossbar for Highlands.

Just as the game gained some momentum it was disrupted by Highlands losing star striker Rodney Ramagalela, stretchered off with what seemed a twisted ankle and replaced by Tendai Ndoro.

Lindokuhle Mbatha was through onto a flick-on from Mothobi Mvala and struck, George Chigova excellently saving.

The first half was confirmed as symmetrically even when Jabu Maluleke’s free-kick from deep was missed with a header by defender Richard Mbhele, Polokwane centreback Sibusiso Mbonani volleying into the Tembisa night sky.

The testiness continued into the second half.

Midfielder Sphiwe Mahlangu cut in from the left and drove over Chigova’s bar.

Ryan Rae’s sliding challenge fell into the path of City midfield dynamo Edgar Manaka, who ran through and forced a save from Ngobeni.

Highlands stepped up the tempo and home advantage. They had a penalty appeal turned down when Mpho Mvelase handled a cross.

With 10 minutes left Ryan Rae’s long throw found the tall frame of Mvala, who powerfully turned a looping header from far that was tipped over at full stretch by Chigova.

In the shootout, for Polokwane Maluleke, Salulani Phiri and Puleng Tlolane were successful. Edgar Manaka saw his kick saved by Ngobeni, then Mohammed Anas lifted high and Mvelase blasted over.

For Highlands, Ndoro, Mvala and Luckyboy Mokoena were successful. Peter Shalulile’s effort was stopped by Chigova, and Sphiwe Mahlangu lifted his over, failing to capitalise on City’s similar misses. Then Mogaila slotted the winner.