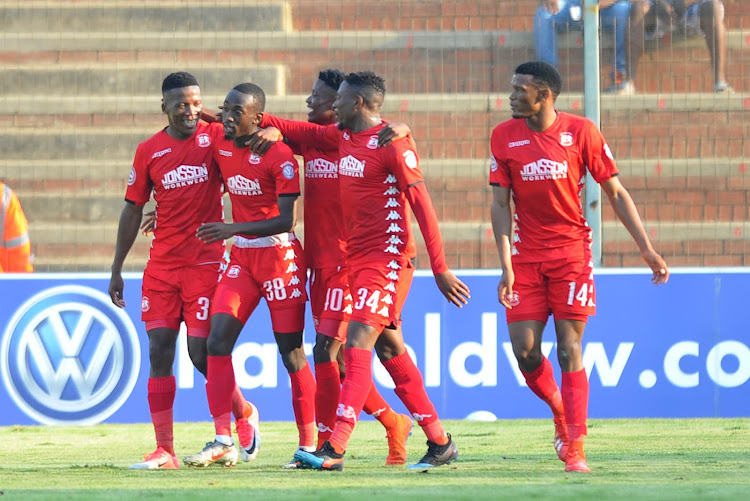 The Lions of the North were placed ninth on the table before their fixture against troubled Maritzburg United.

While Highlands' seventh win in 25 matches earned the number eight spot after 33 points, the Team of the Choice suffered their 14th defeat after 26 games and rooted right at the bottom on the league with only 20 points.

Both sides went straight into work from the outset with the Maritzburg-based side forcing their hosts to concede three corner kicks - one after the other - but still failed to convert.

Highlands finally broke free from some pressure and came close to scoring but Sello Motsepe missed the easiest of chances to guide the ball inside the net when he was right infront of fallen Ofori until the threating fire was distinguished.

Goalkeeper Marlon Heugh saved blushes of his defenders who failed to defend a corner-kick - the fifth for United - when he brilliantly tipped the ball over the bar in the 40th minute.

Again, Highlands broke away and created a chance. But unfortunately a spectacular bicycle-kick by Shalulile went hissing over the top.

Highlands had better chances to go into the interval leading but most of the crosses sent in were went straight to Ofori who had no difficulty making saves. The visitors came back in the second stanza with some oomph and forced Highlands to defend in bigger numbers and in the process conceded two cone kicks which did not change the scoreline.

Shalulile missed a golden opportunity to break the deadlock. With Ofori at his mercy, he fired a shot wide in the 63rd minute - much to the amazement of Mogaila who was better positioned to score.

Tinkler made a second change, bringing on Mkate Mohau for Judas Moseamadi. Well positioned Luckyboy Mokoena inside the box had the opportunity to put Highlands ahead but he riffled a shot over the top.

The fans - who never stopped singing - gazed in disbelief.

United made it third and final substitution when Deolin Mekoa came on for Mxolisi Kunene. A defensive error by United was their own doing.

Shalulile won the ball outside the box, took a full swing before firing a grass cutter which beat Oforo hands down to make finally it 1-0 in the 74th minute.

Two minutes later Shalulile failed to confirm his brace. He fed Ofori a soft shot. Highlands also made use of their three changes when Denzil Hoaseb for Jabulani Shongwe.