Highlands Park dump AmaZulu out of the Nedbank Cup 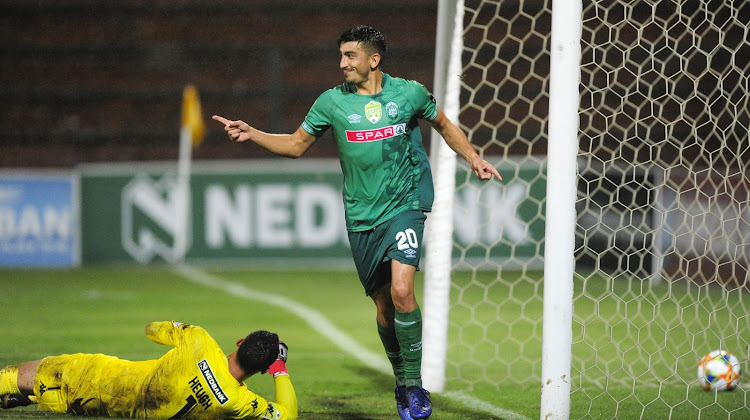 Emiliano Tade of AmaZulu FC scores from a penalty spot past the defence of goalkeeper Marlon Heugh of Highlands Park during the Nedbank Cup first round match at King Zwelithini Stadium on January 25 2019.
Image: Gerhard Duraan/BackpagePix

Highlands Park edged AmaZulu 3-1 on post match penalties in the first round of the Nedbank Cup at the King Zwelithini Stadium on a rainy Friday night, going through in trying circumstances.

The game ended 1-1 after two hours of energy-sapping cup football before Peter Shalulile put away the decisive kick after AmaZulu were poor with their kicks.

It was a setback for Cavin Johnson, the AmaZulu coach who had set his sights on cup glory with a rare public declaration of intent before the match..

The wet conditions make it tricky for both sides from offset but Highlands coach Owen da Gama seemed to have laid the best plans as he introduced pace into his attack, with four changes from Tuesday’s loss to Mamelodi Sundowns, and soon had the hosts under pressure.

AmaZulu’s podgy goalkeeper Siyabonga Mbatha had to make several early stops to keep his side in the contest while Highlands top scorer Mothobi Mvala spurned three good chances, being caught offside twice and missing poorly with the third.

AmaZulu’ passing game faltered on the heavy pitch which was quick in patches and slow elsewhere because of the puddles from the persistent rain.

But they were able to open the scoring when an ill-timed challenge from Highlands’ right back Luckyboy Mokoena saw him catch Samuel Darpoh and give away a penalty.

Emiliano Tade hit the spot kick straight down the middle, almost allowing Marlon Heugh, in the Highlands goal, to get a touch to it, but it was struck with enough power to ensure a goial.

AmaZulu’s lead was under threat straight away as an aggrieved Highlands came blasting back with Mokoena spurning a chance for redemption, and an equaliser, and Peter Shaulile also squandering from close range.

But Da Gama’s men were deservedly level three minutes before half-time as Ryan Rae rose unmarked at the back post to head home a corner in an indictment of AmaZulu’s defence.

After the break, Marc van Heerden hammered one of his characteristic long range, left-footed freekicks against the crossbar while at the other end Highlands’ were unveiling the pace of Mokete Mogaila, tormenting the home defence.

HIghlands might have claimed victory right at the end of the 90 minutes, just before the game was forced into extra time, but Tendai Ndoro and Peter Shalulile took too long to set their sights with just one defender and the keeper to beat.

The heavy pitch meant the players tired visibly and extra time was torment for most, even the fittest battling to keep the pace going. It also led to some rash tackles which saw Highlands’ big midfielder Sello Motsepe sent off in the last minute.

It also precipitated the inevitability of a post-match penalty shootout to decide a place in the second round.