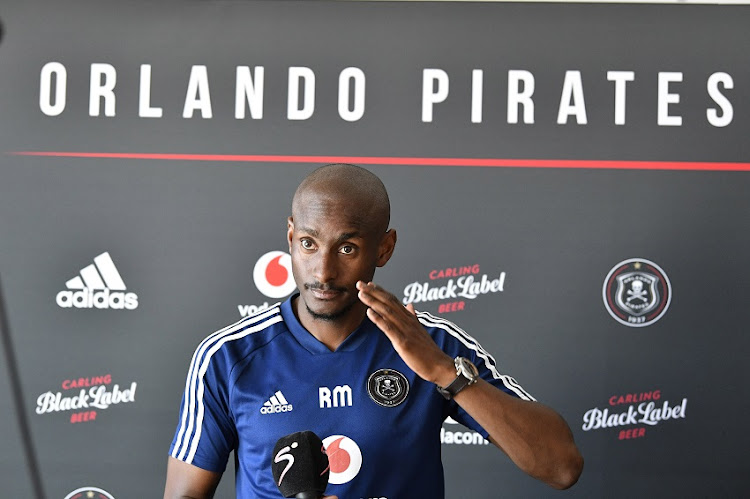 Orlando Pirates caretaker coach Rulani Mokwena has decided to quit Twitter for the sake of his sanity and peace.

The 34-year-old Mokwena often used the social networking site to share his views on a variety of topical issues but after the former assistant coach's elevation to the head coaching seat following the sudden resignation of Milutin Sredojevic last month‚ he has decided to withdraw from that space.

Mokwena said for the sake of his own spirituality‚ he’s elected to distance himself from the at times unforgiving Twittervese.

“Look‚ I think it’s more spiritual than anything‚” Mokwena said at Rand Stadium in Johannesburg on Wednesday.

“It was not about trying to evade the criticism and the noise.

“Coming from a very religious background‚ one thing that I have always believed in is‚ and I always tell the players‚ I say in certain situations I ask ‘what would Jesus do?’.

“Growing up I used to have a little wrist band that had ‘what Jesus would do’.

“So in a lot of the situations that I find myself in‚ I always go back and say ‘what would Jesus do’ if He were to face the similar situation?

“And one of the biggest things that Jesus always did‚ and I don’t want to get religious on you and sound like Steve Komphela maybe‚ but the reality is He would find silence.

"And he would find silence whenever there’s ruckus and noise and instability.

“One of the verses in the Bible when God commands us and He says ‘be still and know that I’m God’.”

In a bid to ensure that he remains fully focussed on his job at Pirates‚ Mokwena said he had to block all the distractions that could interfere with his work.

“So for me I tried to block out the noise and tried to focus on the task at hand‚ it's not necessarily about avoiding criticism‚” said Mokwena‚ who has struggled to guide the Bucs ship to calmer waters after Sredojevic’s departure.

“Criticism will always be there even if we win games.

"We will always be criticised and that’s the nature of the beast.

“You’ve got to accept it when you work in an environment such as Orlando Pirates.

“But like I say‚ it had nothing (his decision to close his account)‚ it’s more religious and it’s for my own sanity and my own peace.”

Pirates host Chippa United at the Orlando Stadium in their fifth league match of the season on Saturday and after getting enough rest during the Fifa international break‚ the Bucs will be expected to register their first win in all competitions under Mokwena’s stewardship.

Bucs were knocked out of the Caf Champions League by Zambian upstarts Green Eagles last month before Highlands Park also dumped them from the first round of the MTN8.

In both these games Mokwena was already in charge‚ just as he was in the drawn and goalless league encounters against AmaZulu (away) and Golden Arrows (home).