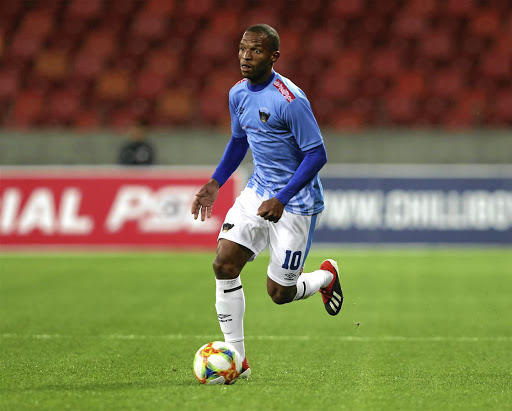 Mzikayise Mashaba has made his long-awaited comeback from a career-threatening injury and the Chippa United utility player is stronger than ever.

The versatile defender made an emotional return to the field recently after signing with the Chilli Boys recently.

Mashaba, 30, played a full match in the goalless draw against Polokwane City a fortnight ago. It was his first game in more than two years, having last played while at Mamelodi Sundowns in May 2017.

He has recovered from a debilitating achilles tendon injury he suffered in training at Sundowns. A few months after the injury Downs terminated his contract, reportedly for misconduct.

Chippa's fitness coach Pedro Picarro says Mashaba has worked hard behind the scenes to be where he is.

"Muzi played 93 minutes in our last game and did very well. He had not played in the past two years," Picarro told Sowetan.

"He was fit when he came but was obviously lacking game time. When he arrived he showed the club that he is a very dedicated player and is hungry. Muzi trains very hard."

Picarro said they are very careful with Mashaba because players who recover from long-term injury can easily re-injure themselves.

"You must understand when you don't play for that long your muscles become weak and are vulnerable to get another injury," he said.

"So we are working with him and monitoring him to make sure we don't overload him."

Many thought Mashaba had retired due to his long spell on the sidelines. But in an interview with Sowetan last year he vowed to make a comeback.

"I am very positive that I'll be back. I have been working hard and my recovery is almost done so just watch this space," Mashaba said.

Mashaba will hope to inspire the Chilli Boys to success when they travel to Orlando Pirates in a league match this weekend.

Chippa United have had one season as a top eight finisher but spent the rest of their time in the top-flight fighting relegation.
Sport
2 years ago

Highlands Park coach Owen da Gama says they are yet to decide on a number of trialists as they aim for a first win of the season when they host ...
Sport
3 years ago
Next Article