Injury-free Mathoho happy to be back 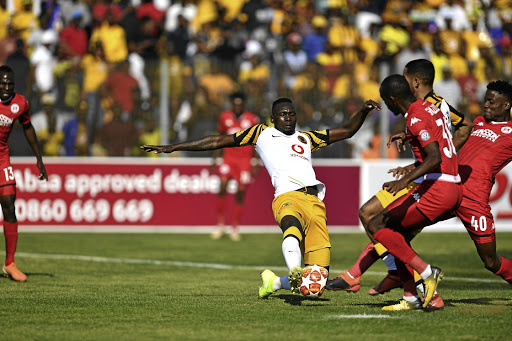 Mulomowandau Mathoho of Kaizer Chiefs has been a vital part of Amakhosi with two goals already. / Gallo Images/ Lefty Shivambu/

Kaizer Chiefs defender Mulomowandau Mathoho says his return to full fitness is the reason for his recent good form.

Mathoho has been plagued by niggling injuries over the past few seasons that have affected his level of performance.

However, he started off the new season with a bang at Amakhosi where he has been solid at the back and has even chipped in two crucial goals.

"I just hope that I am injury-free this season because last season I was affected by injuries a lot," he said.

"Much of my form is due to my full fitness. Scoring goals is not something out of the ordinary for me. Even in previous seasons I used to score goals."

The 29-year-old will surely be a contender for player of the month for August for his impressive showings.

He has been instrumental in Chiefs' early lead at the top of the standings where they have 10 points from four games. Mathoho scored his team's winning goals against Black Leopards and Highlands Park in the league.

These eye-catching performances haven't gone unnoticed, with him earning a call-up to Bafana Bafana after a lengthy absence.

Mathoho was named in Molefi Ntseki's 23-man squad that was announced a fortnight ago.

He says he made it his mission to return to the national team during his rehabilitation process.

"I am very happy to be back with the national team. This is something that I have wanted and I told myself that I will do it," he said.

Mathoho, who last played for Bafana in 2017, will have to wait longer before making his return official in a match.

Bafana unfortunately had to call off their camp after being unable to secure an opponent. Zambia and Madagascar withdrew from playing Bafana in a friendly last week.

The Venda-born centre-back will return to Chiefs to prepare for their upcoming league fixture against Polokwane City at the FNB Stadium on Saturday.