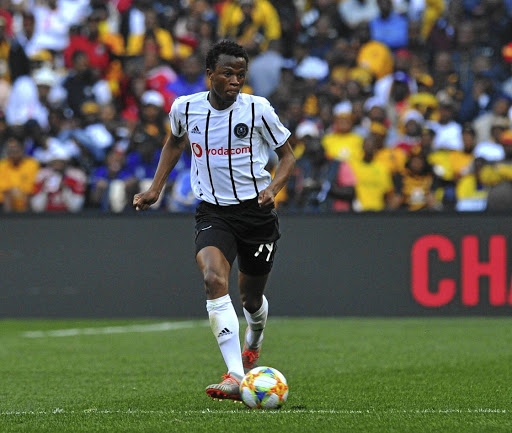 As he struggles to break into Orlando Pirates' match-day squad, defender Bongani Sam has emphasised he doesn't regret joining the Buccaneers.

Since signing for Pirates from Bloemfontein Celtic at the start of the season, Sam is yet to make his official Bucs debut, with the club's hierarchy preferring Paseka Mako and Innocent Maela in his position.

However, the 22-year-old full-back isn't disconcerted by his lack of game time.

"I have no regrets at all. I did not join Pirates by mistake. I am a kind of person who does not focus too much on what people say about me. What I know is that my chance will eventually come," Sam told Sowetan.

SA under-23 captain Tercious Malepe has appealed to his teammates to forget about their impressive showing in their meeting with Zimbabwe a few days ...
Sport
2 years ago

The former Celtic defender also feels arriving at the Sea Robbers carrying an injury, sustained at the Cosafa Cup with the second string Bafana Bafana side, made matters worse.

"When I joined Pirates, I hadn't fully healed from that [hamstring] injury I picked up at the Cosafa Cup. So that made things a bit hard for me. But now I am fit and I will fight for my place," said Sam, who started 19 of the 20 league games he played for Celtic last season.

Pirates are experiencing a rather uninspiring start to the season as they've just managed one win, two draws and a defeat after four league games. Sam has a strong feeling they'll turn the tables.

"It's still too early to start talking about our chances of winning the league, but what we know is that we will turn the corner soon.

"We are working very hard to make sure that we find that great form and we believe that it's just a matter of time before we start winning [games] on a regular basis," Sam stated.

It remains to be seen if Sam, who's the Nedbank Ke Yona team product, finally makes his Pirates debut when the Soweto giants host Chippa United at Orlando Stadium on Saturday (3pm).

Orlando Pirates have announced their Caf Champions League squad ahead of their preliminary clash against Zambian side Green Eagles on Saturday.
Sport
2 years ago

Orlando Pirates have finished runners-up in the last two seasons and blew the title race in 2018-19 when it was there for the taking.
Sport
2 years ago

Thembinkosi Lorch sat on the sidelines as his Orlando Pirates teammates were put through their paces at training at Rand Stadium on Thursday and has ...
Sport
2 years ago
Next Article