What Bafana coach Ntseki learned from Mashaba and Baxter 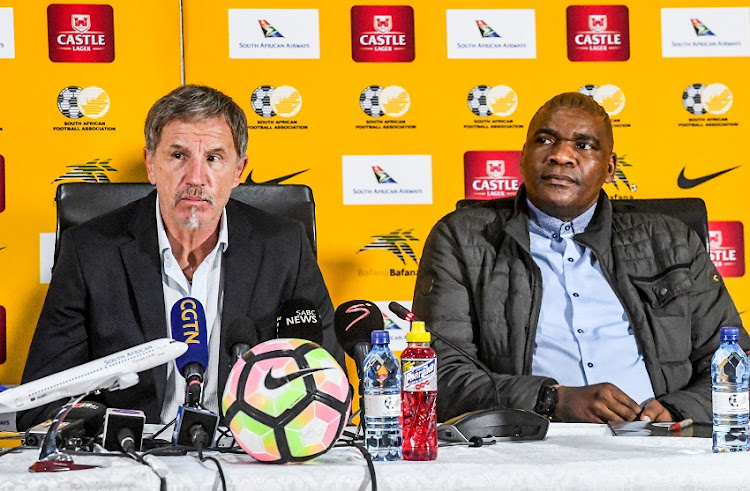 New Bafana Bafana coach Molefi Ntseki has said that he learned from both his national team predecessors – Ephraim “Shakes” Mashaba and Stuart Baxter – both of whom he worked with closely.

Ntseki was appointed on Saturday and takes charge of his first match in the friendly against Madagascar at Orlando Stadium this coming Saturday.

The match replaces the game against Zambia in Lusaka that was called off by that country’s FA in response to the latest wave of xenophobic attacks in South Africa.

Ntseki was assistant to Baxter‚ who resigned as Bafana coach on August 2 after a quarterfinal exit in July at the 2019 Africa Cup of Nations in Egypt.

As national Under-17 coach‚ Ntseki worked closely with Baxter’s predecessor‚ SA football legend Mashaba – who brought him into the national team structures.

Baxter and Mashaba had vastly different approaches. Mashaba believed in giving players freedom of expression‚ but was not big on planning and analysis of opposition. Baxter planned and employed structured football‚ but struggled to form a bond with his players.

Ntseki was asked what he learned from both‚ what he will do differently from both‚ and what his particular playing philosophy will be.

“I think what really helped me was to come to the national Under-17 team‚” Ntseki said.

“ … You have this notion from South Africans to say‚ ‘Give them the freedom to express themselves’.

“But that freedom must be structured. It’s an expression to get the result.

“So when it comes to coach Shakes and coach Stuart‚ I think coach Shakes‚ with his background‚ did very well because he ended up becoming a coach who was playing for results. And we saw him winning very important matches.

“So I think that combination really came out as very handy for South African players.

“Because I was saying to some of our players when we were in Egypt that the problem with South African players is that they want all the coaches to understand them. But they are not prepared to understand those coaches.

“If the coach wants you to apply immediate pressure after losing the ball‚ it’s not as a punishment; it’s because that is what is happening currently in football.

“They [Mashaba and Baxter] are both good coaches in terms of team management‚ in terms of planning for their games.

“But when it comes to coach Stuart‚ he appeared to be more detailed when it came to analysis of his team and the individual analysis of the players in his team. And he plans very well in terms of his opponents.

“So I think the modern way of coaching with coach Stuart was well applied.

“With me‚ [and what I have gained working with] the two coaches‚ fortunately I am a South African‚ and fortunately I have worked with a European coach who has vast experience in coaching.”