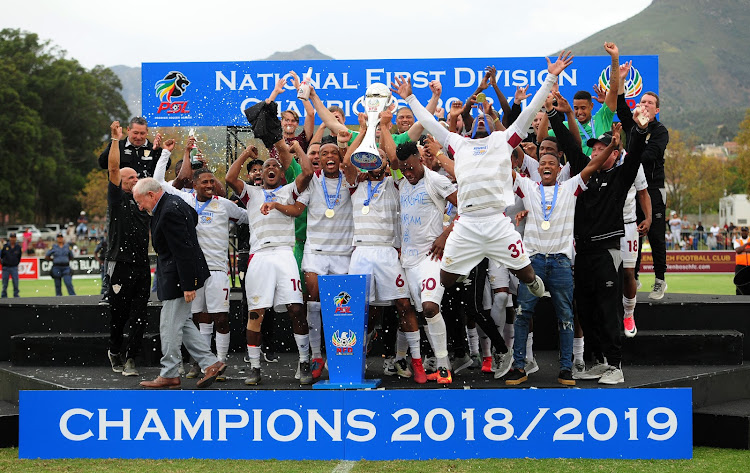 Stellenbosch FC celebrate after winning promotion to the Absa Premiership on May 5 2019.
Image: Ryan Wilkisky/BackpagePix

Stellenbosch FC had only planned to win promotion in another two years‚ so their elevation to the Absa Premiership came as a surprise even to them.

It was achieved with a small squad‚ which they have had to expand significantly ahead of the new campaign.

It is no exaggeration to say that just staying up will be an achievement for Stellenbosch‚ and this will be the major aim in the coming campaign.

This is a club who feel they are on the rise‚ but are they ready for top-flight football yet?

They have battled to secure a home venue and look as though they could have a nomadic existence this season‚ which will not help.

They will always be competitive in the Cape‚ but can they pick up points on the road?

Stellenbosch have a coach in Steve Barker who has both won promotion before and been relegated‚ so he will know exactly what the challenges are that his squad will face.

Experienced players such as Morgan Gould‚ Mpho Matsi and Marc van Heerden have come in‚ while Dutch goalkeeper Boy de Jong arrives from Belgian side Anderlecht.

Otherwise it is much the same as last season‚ with a few additions from other National First Division clubs‚ including Waseem Isaacs and Kristopher Bergman.

Stellenbosch are a side of hard grafters‚ but there are also some quality ball-players in there too‚ such as Iqraam Rayners and Nkanyiso Zungu.

But don’t expect this to be a side who play flowing football.

They will look to keep it tight‚ frustrate and hit teams on the counterattack‚ especially away from home.

Barker has tried to inject some pace since last season and that should allow them to be less predictable.

Stellenbosch’s stadium woes means they will be away from home in six of their first nine games‚ which could put them in early relegation trouble and potentially a spiral they will find difficult to come out of.

The good news is‚ obviously‚ that they will have more home games in the second half of the season‚ but just what level of confidence they will have by then remains to be seen.

They also face a tough run-in that includes Cape Town City‚ Kaizer Chiefs and Orlando Pirates in their last five matches‚ the latter on the final day.