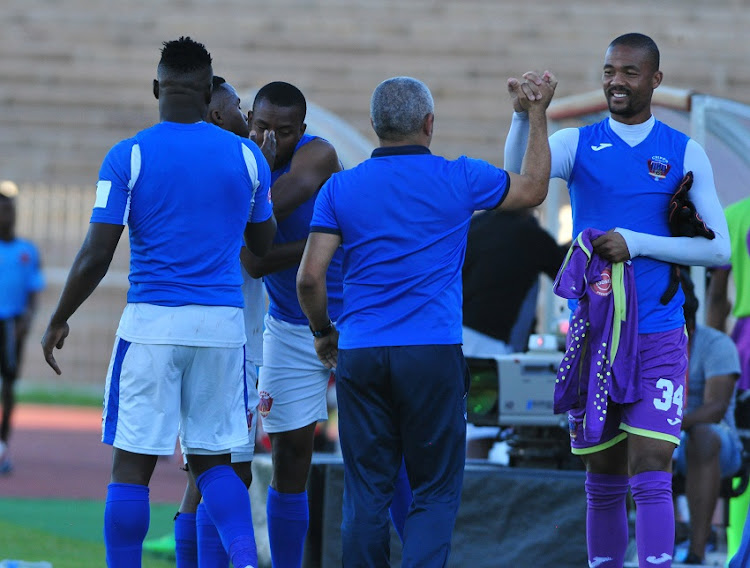 Clinton Larsen coach of Chippa United with players celebrates their win at the end of the Absa Premiership match Polokwane City and Chippa United at Old Peter Mokaba Stadium in May 04, 2019 in Polokwane, South Africa.
Image: Philip Maeta/Gallo Images

Chippa United have had one season as a top eight finisher but spent the rest of their time in the top-flight fighting relegation.

The future of the club is uncertain with the possibility of some cloudy days ahead. Prospects:

Chippa suffered some scary moments last season before Clinton Larsen rescued them‚ albeit right at the end of the campaign.

The club had a massive mid-year clean out as their precarious financial situation hit hard and have followed that up with more departures in the off-season‚ trying to balance the books.

The club’s lucrative contract with the Nelson Mandela Bay Municipality comes to an end in December which could cause further strain on the money stream and maybe even precipitate a return to Cape Town‚ where Chippa still have the lease of the Philippi Stadium.

Chippa still have good contact with the provincial government‚ however‚ and maybe more matches in East London are on the cards. Personnel:

They have lost quality after Zitha Macheke moved to Bidvest Wits and Tebogo Tlolane to Orlando Pirates.

But the Bucs have loaned the club Meshack Maphangule‚ Sandile Mthethwa and Diamond Thopola‚ who returns to familiar surrounds.

Lehlohonolo Masalesa moves from Black Leopards and Chippa are giving an opportunity to Mzikayise Mashaba to revive his career after discipline-related incidents saw him sacked by Mamelodi Sundowns.

The Zimbabwean pair of Elvis Moyo and Kelvin Moyo join from FC Platinum‚ who gave Pirates such a tough time in the African Champions League earlier this year. Playing style:

From the mind-numbing possession game of Dan Malesela to expedient counter-attacking football when up against the top of the table teams‚ Chippa have proven they can play a variety of approaches.

It is just as well as the club will again need to chop and change their approach‚ as they go through the season.

There might be less of the transitional approach because they have lost some pacey players with more passing through the middle likely from Larsen’s team. But when up against better quality players‚ they are careful not to expose themselves to too much risk. Programme:

Chippa agreed to swap with newcomers Stellenbosch‚ who are still homeless‚ so will play their first two games of the season at home.

The second is against champions Sundowns.

Then they go away to Golden Arrows before coming home for two more games in Port Elizabeth against Polokwane City and Bloemfontein Celtic.

There must be a hope that by playing four of their first five games of the league season at home‚ they are able to build an early foundation for the rest of the season.