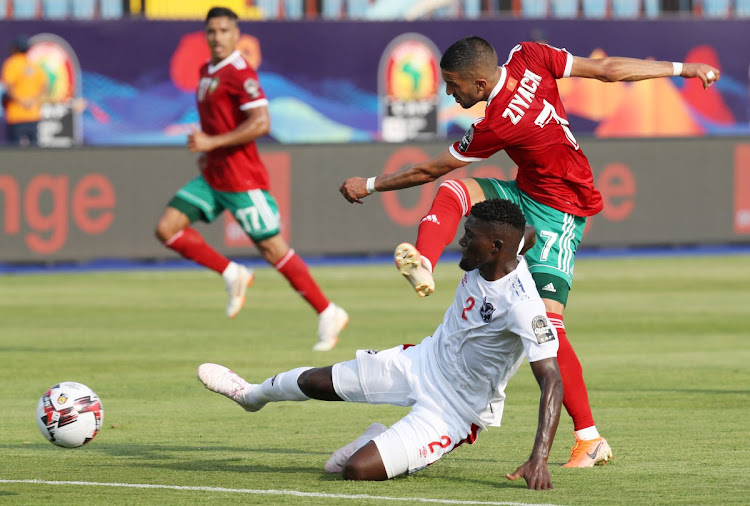 Morocco's Hakim Ziyech takes a shot at goal during their 1-0 win over Group D rivals Namibia during an group opening match in Cairo on June 23 2019.
Image: CAF/Twitter

Searing late afternoon heat played a significant role‚ as for almost 90 minutes Morocco's opening game could not go to script.

Twice Afcon winner Herve Renard's 2018 World Cup qualifiers could not manage the cohesion or tempo to pick apart the courageous Southern African underdogs‚ and eventually it was the Namibians who had to do the scoring for them.

Namibia coach Ricardo Mannetti‚ the former Cape Town Santos forward‚ is a relatively experienced campaigner despite only being 44. He has coached the Brave Warriors now for seven years in two stints.

He won the 2015 Cosafa Cup - twice runners-up Namibia's only victory in the regional tournament - which Mannetti says is where his current squad began being built.

His Warriors fought for every challenge against the obviously more pedigreed Morocco in a match played in high 30 degrees Celsius heat in the first half‚ and mildly more acceptable‚ breezier‚ conditions in the second.

Namibia did not offer a tremendous amount going forward‚ even on the counterattack. But they kept admirably to a gameplan of frustrating and niggling at the Atlas Lions‚ while maintaining a commendable shape.

In honesty‚ though‚ Morocco were also just flat.

They dominated‚ but without a frequency of scoring chances. The Ajax Amsterdam right midfielder Hakim Ziyech‚ while he eventually provided the telling pass‚ could not find a rhythm.

Bafana will hope‚ though it seems unlikely Renard's men will remain this flat‚ for a similarly unimpressive Lions when the two meet at this stadium on Monday‚ July 1.

South Africa will also know now to be wary of Namibia‚ who will be fired up and more confident against their Southern African big brother here on Friday.

The first half certainly did not go to plan for Morocco. The heat played a large part. Play was sluggish and of a low standard.

The North Africans' best chance of the half came early‚ just after the 10th minute‚ when right-back Nabil Dirar struck a drive crisply‚ forcing Namibia goalkeeper Llodt Kazapuwa to tip over at full stretch.

Morocco attempted to lift the tempo from the break.

From a half-cleared corner on the hour substitute Sofiyane Boufal fashioned space and forced a good stop from Kazapuwa.

Ziyech had a shot cleared off the line in the 72nd. Mbark Boussouffa's drive flashed wide as the clock wound down.

Ziyech‚ having shown only flashes of class‚ provided the decisive‚ awkward free-kick that Keimuine turned past Kazapuwa‚ to the relief of Morocco and their travelling supporters.