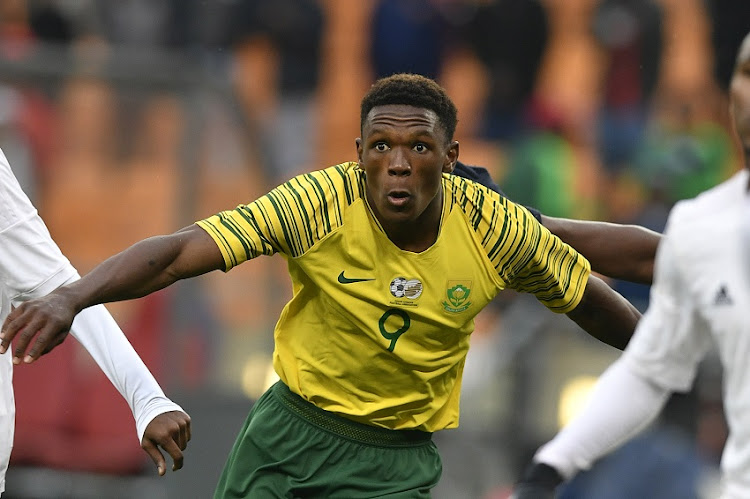 The two played together for a season in the reserves at Lille in 2015-16‚ where Pépé‚ a winger or striker‚ scored 22 goals in 38 league games has just had an outstanding 2018-19 Ligue1 campaign to be linked to Bayern Munich for €70m‚ or just over a billion rand.

South Africa's answer to Cote d'Ivoire's pacey emerging star on the billiard table surface of Cairo's compact new 30‚000-seater Al Salam Stadium is centre-forward Mothiba‚ also 23‚ and who also had a breakout season in Ligue 1 with 12 goals in 36 league and cup games for new club Strasbourg.

Mothiba's strike rate is not as impressive as Pépé's‚ but he's a different player - a physical beast of a centre-forward with plenty of his own class in his technical touches and ability to hold the ball up.

Even when he does not score‚ Mothiba shrugs off defenders for the forwards around him - notably Percy Tau - to feed off the scraps.

Mothiba this weekend at the Bafana team hotel near Cairo International Airport warned his teammates of the class and pace of Pépé.

“There are some players in Ivory Coast I used to play with‚ and some I have played against because some of them play in Ligue 1‚” Mothiba said.

“And especially Nicolas Pepe‚ who I used to play with at Lille. Pepe is a very good player. He’s fast‚ he’s technical.

“I know him and played a year with him. I know his quality and I’ve told our centrebacks about where to be careful with him.

“But the coach [Stuart Baxter] is doing that. He’s doing a good job and telling everyone in our defence to be careful.”

With Pépé expected to play on the right; Crystal Palace winger Wilfried Zaha‚ a target of Manchester United‚ on the left‚ and veteran ex-Manchester City forward Wilfried Bony in the middle‚ Les Éléphants‚ have plenty of pace and destructive power in their frontline.

Bafana have a solid backline who conceded just two goals in the qualifiers.

Thamsanqa Mkhize‚ captain Thulani Hlatshwayo‚ Buhle Mkwhanazi and Sifiso Hlanti are not likely to be bullied off the ball‚ as has happened to many a Bafana defence against big West and North Africans.

Perhaps they lack a yard of pace‚ though.

It would appear that to manage the situation of a quick frontline against a sturdy‚ but perhaps not fast‚ defence is for the central midfielders - notably Dean Furman‚ who can cover a lot of kilometres in a game - to work hard to close the supply to Cote d'Ivoire's forwards in the heat of a 4.30pm kickoff.

“Dean. I like Dean‚” Mothiba grinned in his somewhat bizarre near-French accent.

“He’s a warrior. He works very hard. At training‚ also‚ he always pushes us to give 100 percent.

“He’s always at the back so he’s always telling me what to do. Always shouting‚ ‘go left’.

“And he runs a lot‚ hey. He’s a warrior. He runs left and right. I like him very much.”

After Ivory Coast‚ Bafana meet Namibia on Friday‚ then Morocco in their final Group D game on Monday‚ July 1‚ all their first-round matches being played at Al Salam Stadium.