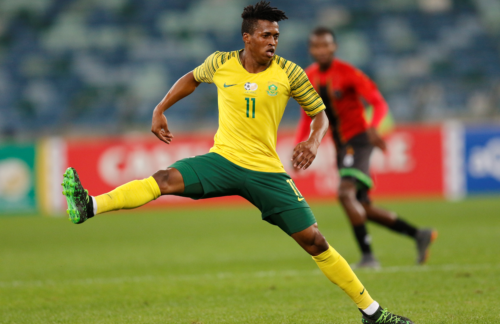 South Africa claimed the COSAFA Cup Plate competition for the third year in a row with a 5-4 penalty shoot-out victory over Malawi after the teams had played to a frustrating 0-0 draw in the final at the Moses Mabhida Stadium on Friday.

It was a damning statistic that South Africa had 17 shots at goal in the 120 minutes, but only one on target, as they sprayed their efforts high and wide in hat was a poor display in front of goal.

But, playing their third shoot-out in three games at the regional competition, they had goalkeeper Mondli Mpoto to thank as he saved from Malawi skipper John Banda and then watched as two of The Flames missed the target.

It is some consolation for the side, but more importantly in was minutes in the middle for the players as coach David Notoane builds for the African Under-23 Championship qualifier against Zimbabwe in September, though he will be lining them up for shooting practice.

Notoane made several changes to his line-up, including the return of captain Tercious Malepe, Liam Jordan and Grant Margeman, while influential midfielder Teboho Mokoena dropped the bench.

There was little in the way of clear-cut chances in the opening half as home goalkeeper Mondli Mpoto saved from Gerald Phiri Jnr’s free-kick and new Baroka FC signing Richard Mbulu narrowly failed to get onto the end of Gabadinho Mhango’s cross.

South Africa will go in hunt of the Cosafa Cup plate trophy when they face Malawi in the final at the Moses Mabhida Stadium on Friday night.
Sport
2 years ago

South Africa should have been ahead 10 minutes before the break when winger Kamohelo Mahlatsi got his head onto a corner, but the ball cannoned back off the crossbar and away to safety.

Malawi goalkeeper Brighton Munthali had to be smart at his near post when a header from his own defender, Stanley Sanudi, looked as though it would creep in.

Luther Singh had little in the way of chances in the opening period, and when he did get an opportunity at the back post from a header, could not get it on target.

Mhango then found some space behind the home defence, but could not beat Mpoto, who saved well with his left hand.

Former Bafana Bafana coach Shakes Mashaba says it was a big blunder not to use the Cosafa Cup as preparation for the Africa Cup of Nations (Afcon).
Sport
2 years ago

Jordan should have South Africa ahead just before the break when he found space in the box, but skied his shot from eight yards after excellent work on the right from Margeman.

The SuperSport winger should have done better when he fired the ball over the bar from an excellent position as the home side continued to battle in front of goal.

The match went into 30 minutes of extra-time, with the opening opportunity falling to Singh, who was well teed-up by Jordan, but could not turn the ball home under pressure from the goalkeeper.

Mahlatsi then shot wildly wide, and then dallied on the ball when well-placed, neither providing a shot nor a cross in what was becoming an increasingly ragged performance.

Gift Links worked some space for himself in the box, but also fired well over, and then was denied by a point-blank save from Munthali as the game had to be decided on spot-kicks.