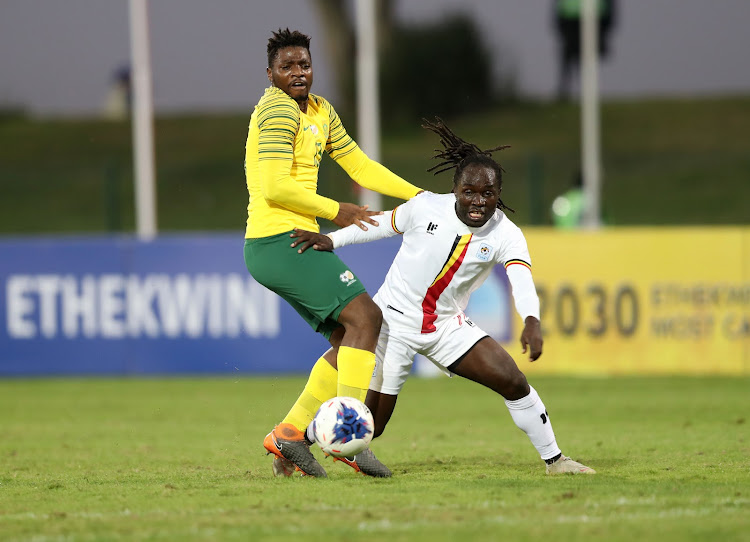 Dan Serunkuma of Uganda is challenged by Thendo Mukumela of South Africa during the 2019 Cosafa Cup match at Princess Magogo Stadium in Durban on June 4 2019.
Image: Samuel Shivambu/BackpagePix

Goalkeeper Mondli Mpoto proved the hero as South Africa squeezed into the final of the Plate competition at the Cosafa Cup with a 4-2 penalty shoot-out victory over East African guest nation Uganda at the Princess Magogo Stadium on Tuesday.

The match had finished 1-1 as South Africa overcame a slow start to force the game into a shoot-out as Luther Singh equalised following another fine all-round performance that earned him the Man of the Match.

But Mpoto won it for the home side as he saved from in the shoot-out from Mustafa Kizza and then saw Muzamiru Mutyaba crash his shot against the post.

South Africa now go into Friday’s Plate final with the chance to retain the trophy they won last year and also provide another 90 minutes for coach David Notoane as he fine-tunes his squad for the Africa Under-23 Championship qualifier against Zimbabwe in September.

Notoane made six changes to his side from the team that drew 2-2 with Botswana having promised to use his full squad in the competition.

Mondli Mpoto took over in goals‚ while there were debuts defenders Keanu Cupido and Bongani Sam. Gift Links‚ Sipho Mbule and Thendo Mukumela also came into the starting line-up.

Uganda should have been in front inside the opening 10 minutes when hesitancy in the South Africa defence left Juma Balinya with a chance from two yards out‚ but the Police FC forward was his effort blocked by Mpoto.

Bongani Sam limped off just 10 minutes into his debut with a hamstring issue‚ to be replaced by Jamie Webber‚ and shortly afterwards Keanu Cupido came close to a goal on debut when his header from a superb Luther Singh cross came back off the crossbar.

South Africa grew in confidence as the first half wore on‚ but did not do enough to trouble Uganda goalkeeper Charles Lukwago.

Luther Singh was proving an excellent outlet up front and his shot from the edge of the box sailed just over the crossbar‚ while Mbule narrowly failed to get onto the loose ball in The Cranes’ box as the defender got there a millisecond ahead of him.

Jemondre Dickens came on for his debut at the break‚ replacing Mbule‚ but within seconds of the restart‚ Uganda had the lead.

Dan Serunkuma saw the space open up in front of him and he waltzed through the centre of the South African defence‚ before slotting past an exposed Mpoto in the home goal.Dickens raced clear shortly afterwards and with players to his right‚ opted to shoot‚ the ball narrowly flying wide of the goal with the keeper beaten.

Mpoto reacted brilliantly to stop a thunderous drive from Balinya‚ and from the resultant corner denied Nicholas Kasozi with another superb save.

Links flashed a shot inches wide‚ while Webber missed an excellent headed chance at the back post from Singh’s delicious cross.

Another debutant‚ Kgaogelo Sekgota‚ missed a super opportunity to win the game in injury-time when the ball fell to him in acres of space in the box‚ but with just the keeper to beat‚ fired the ball into the gloveman.