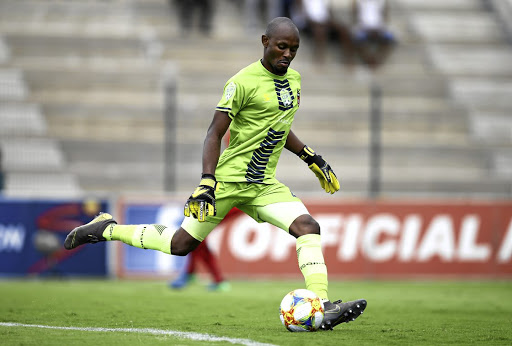 While he welcomes the competition that Botswana international shot-stopper Ezekiel Morake brings, TS Galaxy first-choice goalkeeper and captain Ludwe Mpakumpaku has hinted he could leave.

The 23-year-old keeper, who saved Teboho Mokoena's penalty to propel the Zebras to the semifinals of this regional competition, joins from Jwaneng Galaxy.

"I am happy about the arrival of a new keeper [Morake]. it's encouraging because this means there'll be more competition. Already, I had a very good competition with guys like Thabo Modiba and Luthando Sixhaso,'' Mpakumpaku told Sowetan yesterday.

"When a quality player who plays your position joins, that must tell you to work even harder.

"Competition is always welcome in football - you must be willing to compete. He's a highly-rated international goal
keeper who will help the club,'' said Mpakumpaku.

Having been one of the influential figures in Galaxy's historic Nedbank Cup triumph, it's possible that Mpakumpaku, 25, has already secured greener pastures and that Morake was signed as a replacement.

"About my future and my contract, I do not want to reveal much. But let us just wait and see for maybe two weeks from now. I know something might happen but I cannot share it now.''

Morake's arrival can also be that Galaxy is beefing up for its CAF Confederation Cup campaign. The Dan Malesela-mentored side secured their berth in CAF's second-tier tournament through winning the Nedbank Cup last month.

The Rockets beat Kaizer Chiefs 1-0 in the final at Moses Mabhida, becoming the first lower division side to lift the Nedbank Cup. Mpakumpaku started all six of Galaxy's Ke Yona Cup matches.