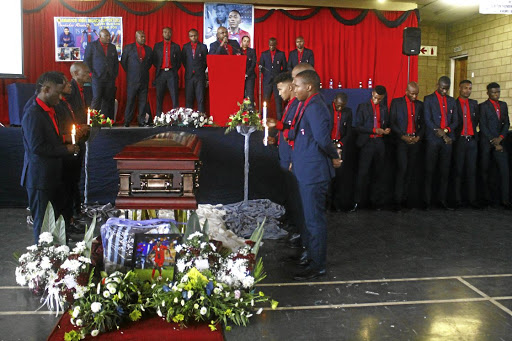 The funeral service of TS Galaxy star Thembinkosi Mbamba, who died in a car crash, was held in Duduza yesterday.
Image: Kabelo Mokoena

TS Galaxy star Thembinkosi "Bashin" Mbamba, 23, was laid to rest yesterday following a lively service at Duduza Multipurpose Centre in his hometown of Duduza in Ekurhuleni.

"He shall be dearly missed by us, and I stand here as the presiding officer of our club and I'm here to do nothing else but give tribute to one of us. I'm sure you'll agree that this is a very difficult moment for a father, more especially in my position.

"If I were to have my way, I would have avoided this but it's unfortunate that certain things cannot be avoided. I had to step up, take this moment and salute one of our soldiers," said the president, who was surrounded by team members.

Xaba said he was saddened by the sudden loss of talent he groomed. "After the big win he came to me and we would watch soccer games on TV. He was already preparing for next season," he said.

Hundreds of soccer fans continued singing outside the hall throughout the service. Mbamba died after being involved in a car accident last week Friday.

TS Galaxy man of the moment Zakhele Lepasa has paid tribute to his late former teammate Thembinkosi Mbamba and said he hopes the Mpumalanga side will ...
Sport
2 years ago
Next Article