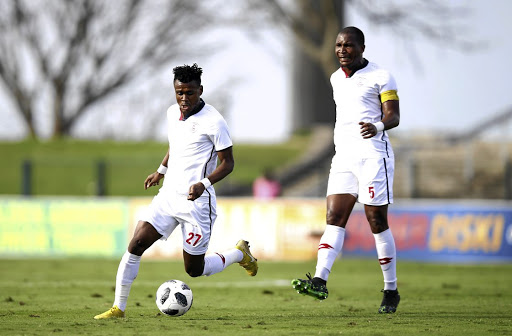 Harris Tchilimbou and Paulos Masehe may have to look for employment after Free State Stars were condemned to the doldrums of the NFD following their relegation. /Gallo Images/ Steve Haag

The consequences of getting relegated from the Absa Premiership to the National First Division (NFD) are detrimental not only for the players, but for behind-the-scenes staff members too.

Free State Stars recently suffered the unenviable fate of being automatically demoted to the NFD after their last-place finish in the top flight.

It remains to be seen if the Mokoena family will have the appetite to continue with the club in the lower tier. After all, the family nearly sold the club a few seasons ago, citing financial challenges.

The reality the Stars management will be faced with is that they will have to retrench some of their full-time staff. The club will also have to reduce the number of players and professionals in their employ, given the chasm that exists between the two leagues.

Judas Moseamedi and Bongokuhle Hlongwane scored second half goals as Maritzburg United took a giant step towards safety with a 2-0 victory over ...
Sport
3 years ago

Elite league teams also get to make money from cup competitions, with those qualifying for the MTN8 guaranteed R800,000 participation fee, while playing in the Telkom Knockout banks each team R250,000 before they kick a ball.

"You are forced to downsize quite drastically and have to shed many of the jobs in the backroom office," De Sa said.

"The reality is that when you are in the NFD, then you no longer need a huge staff complement.

"You don't even have a MultiChoice Diski team, so that alone is a massive reduction straight away because you have to let go of the players, coaches and so on."

Focus will be at the top of the table for obvious reasons on Saturday as the Absa Premiership title race comes to a close‚ but at the bottom there is ...
Sport
3 years ago

The former Bafana Bafana goalie added that when they got relegated two seasons ago, they had to negotiate contract terminations and salary reductions with some players.

"All clubs in the league should have a clause in their contracts that state that if the club gets relegated, then contracts should be renegotiated," De Sa said.

"It's impossible to maintain contracts from the top league with the team in the NFD."

Current Golden Arrows goalkeeper Sherywn Naicker, who got relegated with Jomo Cosmos four seasons ago, said: "It's not nice to see people who you worked with suddenly unemployed. Some will look to point fingers and blame others. It's just a bad experience for everyone involved."