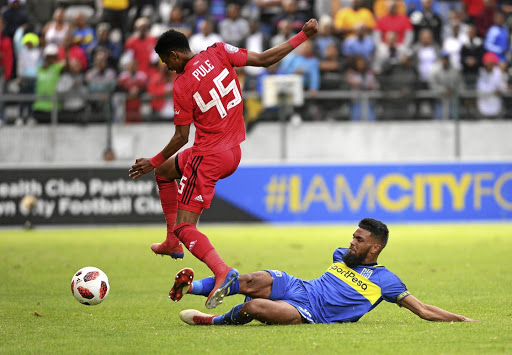 The Buccaneers are now just a single point ahead of second-placed Mamelodi Sundowns, but have played a game more and could see the Brazilians take over top spot before the final round of matches next weekend.

Pirates fell behind to a Zukile Kewuti goal after only 18 seconds, but within 15 minutes they were on level terms after an equaliser from Thembinkosi Lorch, and early in the second period grabbed the lead through Luvuyo Memela.

But Martin broke the hearts of The Ghost with the equaliser in a magnificent atmosphere as tens of thousands of expectant Pirates fans filled the stands.

Pirates coach Milutin Sredojevic went with the same starting XI that did duty in the 1-0 away victory over Maritzburg United 10 days previously.

After a season of tinkering, he has seemingly settled on what he feels is his best side, which did not include midfielder Xola Mlambo, who started from the bench in a match that kicked off 15 minutes late.

City were again without suspended striker Kermit Erasmus, who surely would have relished facing his former employers, but restored left-back Edmilson Dove, winger Gift Links and playmaker Chris David to the starting XI.

It was a perfect start for Maritzburg as Mohau Mokate opened the scoring with just four minutes on the clock.

SuperSport, nowhere to be found in the first half, took advantage of careless defending by Maritzburg as Aubrey Modiba levelled matters in the 47th minute.

The Team of Choice kept pushing forward and Judas Moseamedi put them ahead again in the 73rd, then scored another in the dying minutes.