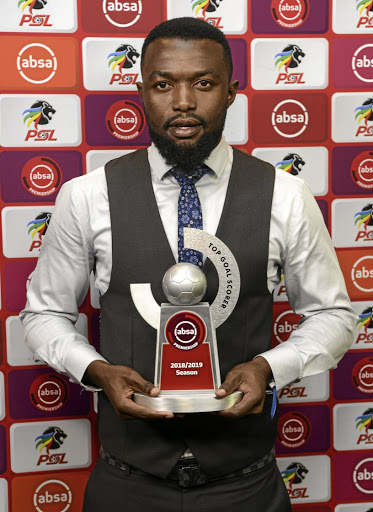 On the back of winning his second Golden Boot in two successive seasons, Black Leopards striker Mwape Musonda seems to be fascinated by the rumour that Kaizer Chiefs are interested in him.

Having finished the Absa Premiership campaign with 16 goals, Musonda walked away with the Top Scorer's award at the gala dinner held at the Durban ICC over the weekend.

The Zambian marksman also topped the second tier's scoring charts in the 2017/18 season, with 15 strikes to help Lidoda Duvha clinch promotion via the playoffs.

"Yeah, obviously as a player you want to grow and I don't think anyone can turn down an offer like that," Musonda answered when asked what he made of the reported interest in his services by Chiefs.

"But then, it's not up to me, someone must call. You can't take yourself there [to Chiefs] and say 'I will play for you'. If they call you have to pick up the phone and hear what they are saying."

Musonda feels deep pleasure that he managed to remain consistent, replicating his NFD heroics even in elite league.

"That' something that I am proud about - to do it in two consecutive seasons. Even though it's different leagues, but at the end of the day I have done it twice," said the former Orlando Pirates and Golden Arrows man.

While he's not quite satisfied with the amount of goals he scored, Musonda, 28, has ambitiously challenged himself to net 20 goals next term.

"I think for me it's more of being surprised if I don't score. I have challenged myself because I am not happy with the 16 goals that I have scored," noted the Leopards striker.

"If you look back you'll see that I missed a lot of goal scoring opportunities, where only if I had composed myself I would have gone to 20 goals, which is the tally the league has been crying about, that we don't reach. It's a challenge for me to do it next season."

The PSL season in numbers

Stars, Maritzburg lost most games
Sport
3 years ago
Next Article