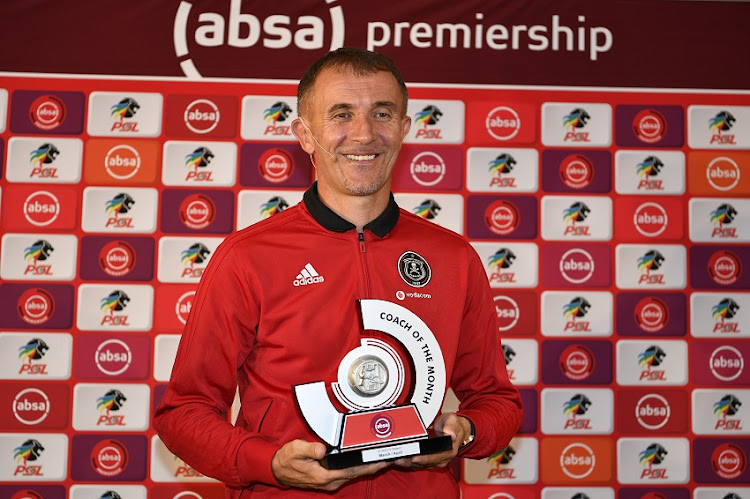 Orlando Pirates coach Milutin Sredojevic has thanked his technical support staff and his players after he won the coach of the month award for the second time this season on Thursday.

Sredojevic won for March/April as Bucs continue their push for a first league title since 2012.

Black Leopards striker and PSL’s top scorer Mwape Musonda‚ whose 15 goals may well help his club survive relegation‚ walked away with the player of the month gong also for the second time this season.

Kaizer Chiefs striker Khama Billiat won the PSL’s goal of the month award for the strike he converted in a 1-1 league draw against SuperSport United at the Mbombela Stadium in the middle of March.

The Serbian born coach Sredojevic said without the assistance from Rulani Mokwena and Fadlu Davids and the rest of his technical staff‚ Bucs would not be on the verge of winning the league title.

Bucs are involved in a tightly contested tussle for the league title with holders Mamelodi Sundowns with two league matches to go this season.

“First of all when you’re looking at me‚ you need to look at me through the technical team that I represent‚” said Sredojevic when he accepted his award for the period in which Pirates intensified their league challenge with an unbeaten seven- match run of five victories‚ including four in their last four.

Bucs drew the other two matches.

“I have done this with Rulani and Fadlu and the rest of the technical team. I’m an ambassador of the work of the players and our team.

Home and away records at stake in crucial match.
Sport
2 years ago

“When I look at the season behind us I can say it has been extremely competitive when you have a situation where until two matches to go we’re still fighting for the trophy.

“I can say it’s been a roller-coaster season but in the end football is an extremely profitable game.”

Asked if he was feeling any pressure ahead of the last two games against Cape Town City away and Polokwane City at home‚ Sredojevic said with the experience of having won 16 trophies in nearly 20 years while coaching in Africa‚ it is not difficult for him to remain calm.

“We are strictly focussing on ourselves and not elsewhere.

"It is a tactical house rule that we do not comment on officiating and what is with other teams‚” said the Bucs coach.

“We are looking at ourselves‚ looking at each and every match to improve.

“Last year we had the whole season and collected 55 points and now with 180 minutes still to play‚ we have 53‚ putting us in a position to surpass what we achieved last year to show that we have progressed.

“We are not thinking of anything else‚ we are fully focussed on the upcoming match against Cape Town City.

“We have been promised hand grenades (by City coach Benni McCarthy) but we know that this is a game of football. Two goods teams‚ let us see how far we can go.”