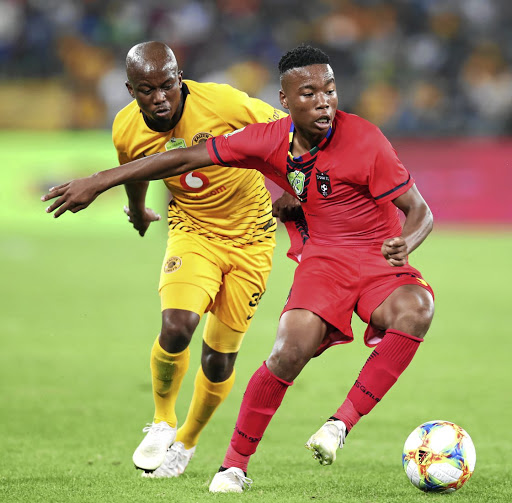 One of TS Galaxy's unsung heroes Tshegofatso Nyama, who's also the youngest squad member, has confidently prophesied himself being a bone of contention for top-flight clubs in the near future.

Nyama, 19, is one of a number of Galaxy players who haven't hogged the limelight, despite their blistering form in the club's run-in to the historic Nedbank Cup triumph.

Galaxy, a newbie club who are merely 10 months in the professional ranks, albeit in the second-tier, became the first NFD outfit to lift the Nedbank Cup after overcoming Kaizer Chiefs 1-0 at the sold-out Moses Mabhida Stadium, Durban, at the weekend.

It was Zakhele Lepasa's stoppage time penalty that inflicted pain on Amakhosi.

"After my performances throughout the Nedbank Cup, I think many Premier Soccer League (PSL) teams will now look at me closely and come knocking for my signature," a jubilant Nyama told Sowetan in the wake of their conquest.

"We can't all be in the limelight at once. I have been working hard and it's an amazing feeling that I have helped the club win the cup.

"My ultimate dream is to play overseas, but of course the PSL should be the next step."

Against Chiefs, Nyama, who played all the matches en route to the decider, was withdrawn in the first half after sustaining a hamstring injury.

The lad from Tembisa, on the East Rand, came through the ranks of the famed Stars of Africa Academy, under the tutelage of Farouk Khan.

"I spent five good years at the Stars of Africa learning the basics of the game. Coach Dan Malesela signed me after we played a friendly against them," Nyama reflected.

The Rockets midfielder looks up to Mamelodi Sundowns maestro Themba Zwane, who also hails from Tembisa.

Nyama is known for having an excellent first touch, dribbling skills, and good technical ability, which, along with his intelligence in attack, allow him to retain possession in tight spaces. He creates space for himself and open up the defence.

Bring on the CAF Confederation Cup! These were the words of TS Galaxy owner Tim Sukazi after his club won the Nedbank Cup.
Sport
2 years ago
Next Article