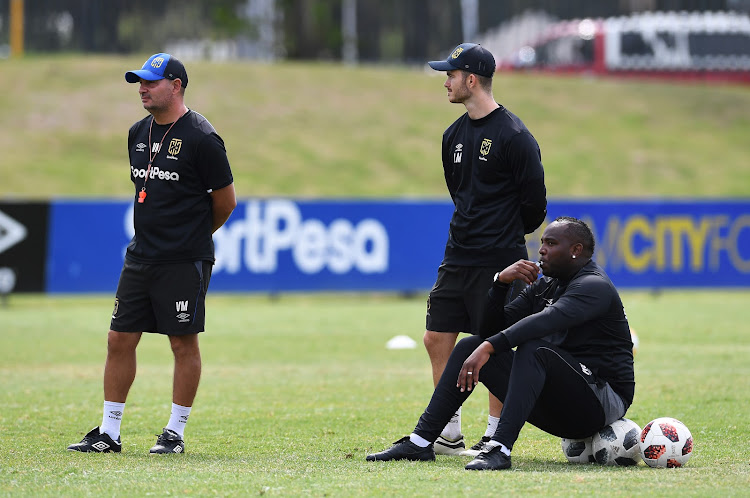 Cape Town City coaching stuff look on during a training session at the club's base at Hartleyvale Football Grounds in Cape Town on March 28 2019.
Image: Ashley Vlotman

Benni McCarthy is expecting an open contest when he takes his Cape Town City to Chippa United on Friday night‚ with both teams desperate for the victory to aid their differing ambitions.

City’s Absa Premiership title hopes have realistically gone‚ but they could still finish in the top three‚ which would be a major feather in the cap of young coach McCarthy.

McCarthy’s team received a boost on the morning of their clash against Chippa with the news that they had moved from fifth to fourth place on 44 points from the outcome of a disciplinary matter from their game abandoned against Bloemfontein Celtic this month.

Chippa are fighting for their lives at the foot of the table and currently occupy the promotion-relegation playoff position‚ but will move as high as 12th with a win and virtually ensure they will not be automatically relegated‚ at least.

McCarthy says he has respect for Chippa coach Clinton Larsen‚ and believes their hosts will look to attack them at Nelson Mandela Bay Stadium in Port Elizabeth.

“He is a young generation coach‚ from my generation. A bit older than me maybe‚ but our paths crossed as players‚ so you can see he loves good football and loves to play attacking football.

“It is going to be a good game‚ two teams that every time we play‚ we share the spoils. Hopefully this time it is different and we come away with all three points.

“It won’t be easy‚ especially now they didn’t pick up points against Sundowns [in a 3-2 defeat to Chippa in Pretoria on Tuesday]. They will be even more desperate to win. That makes it tougher than ever.”

City have three matches remaining‚ starting with Chippa‚ then Orlando Pirates at home and Black Leopards away.

“We have three important games that can be crucial for us to help us cement a place in the top ranks of the league‚” McCarthy admitted.

City have a decision to make up-front with striker Kermit Erasmus suspended following his reckless red card in the 1-1 draw with Highlands Park on Tuesday‚ with McCarthy keeping his cards close to his chest over a replacement.

“‘Shaka’ [Siphelele Mthembu]‚ Gift [Links]‚ Craig Martin on top‚ who knows. I might surprise you guys‚” he said with a smile.