Pitso Mosimane: 'I don't know how many points we really have.' 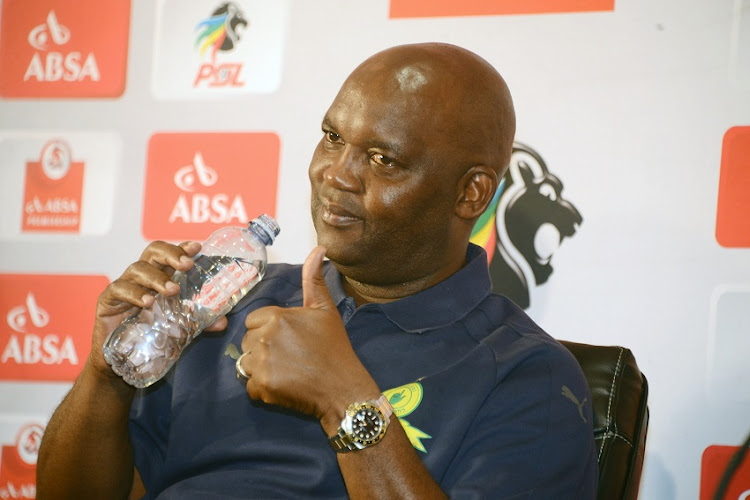 Mamelodi Sundowns Head coach Pitso Mosimane named Coach of the Month during the Coach and Player of the Month Announcement at PSL Offices on May 09, 2018 in Johannesburg, South Africa.
Image: Lefty Shivambu/Gallo Images

Forthright Mamelodi Sundowns coach Pitso Mosimane reignited his long-running public spat with the Premier Soccer League (PSL) after suggesting that while the log standings say the Brazilians have amassed 50 points‚ the reality is he has no idea how many they really have in the bag.

Sundowns face the threat of a points deduction after they were found guilty of fielding Wayne Arendse as an ineligible player in their 1-1 draw against Bidvest Wits at Lucas Moripe Stadium in October.

The PSL announced on Wednesday that submissions have been made in writing to the disciplinary committee dealing with the saga and now sentencing is awaited.

The second-placed Sundowns are level on points with leaders Orlando Pirates and Mosimane said he fears that the disciplinary committee could deliver sentencing with two games remaining in the season.

“I don’t know when we will get finality in this matter‚” he said.

“Maybe there is another postponement because you know that we are going to Morocco (on Tuesday night).

"I am afraid that the decision can be made when there are two games left in the season. I don’t know how many points I have and I have always said this.

"Until that thing (sentence) comes out‚ I don’t know how many I have.

"On paper‚ the league standings say I have 50 points but in reality I don’t know.

"But I have always believed that it is not over until the fat lady sings‚ she has not sung yet.”

Mosimane has in the meantime shifted his attention to things he can control in the form of the Caf Champions League semifinal clash against Wydad Casablanca at the Complexe Prince Moulay Abdellah Stadium in Rabat on Friday.

“We have played them many times and probably it is boring for you guys to report on this match.

"It is probably the same with the Wydad coach because he can name 80 percent of my team that is going to start and I can also name 90 percent of the Wydad team that will start‚” said Mosimane.

“The rivalry is because the result is always 1-1‚ 1-0‚ 2-1 and maybe that creates good tension and it has been consistent in that way.

"It has been consistent in terms of expectations and what is different now is that we have never played them away first.

"Let’s see how they respond when they know that they have to come here for the second leg.”